This post is going to be a bit light on words, as I’m suffering from a relapse of the problems described in my post a couple of days ago (which was what prompted it) and, although I’m a bit better today, I’m still rather struggling!

So yes, Caturday. The Internet name for posting pictures of cats on a Saturday. Except it’s Sunday. Although possibly it isn’t in some far-flung corner of the world, so IT STILL COUNTS.

For most of my childhood, I didn’t have an awful lot of exposure to cats – we had a cat called Kipper when I was very young, but he/she died while I was still too young to really remember her so all I have to go on is this photo (and photos kept by my siblings) 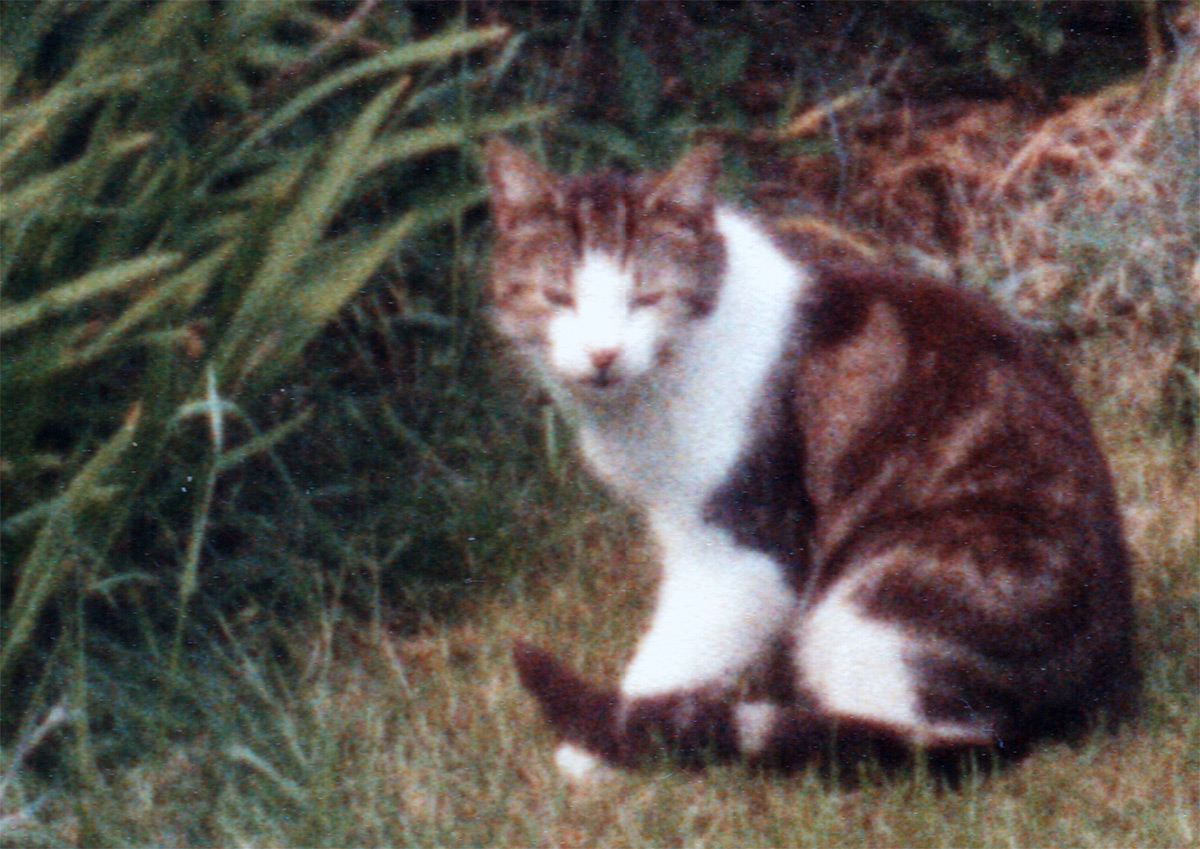 Excuse the poor quality, it’s a scanned image from a very old photograph.

We then got a dog called Odie, who won’t feature in this post as he isn’t a cat. He is a dog though, but he won’t even fit.

My next “exposure” to cats was when I started dating a gal named, aptly enough, Kat (“hello” if you’re reading this!) – Kat had three cats – Bandit, Smoky and Sooty. I’ve not got any photos of Sooty handy, which is not surprising as she was a jet black cat and was therefore incredibly difficult to take a decent photo of. 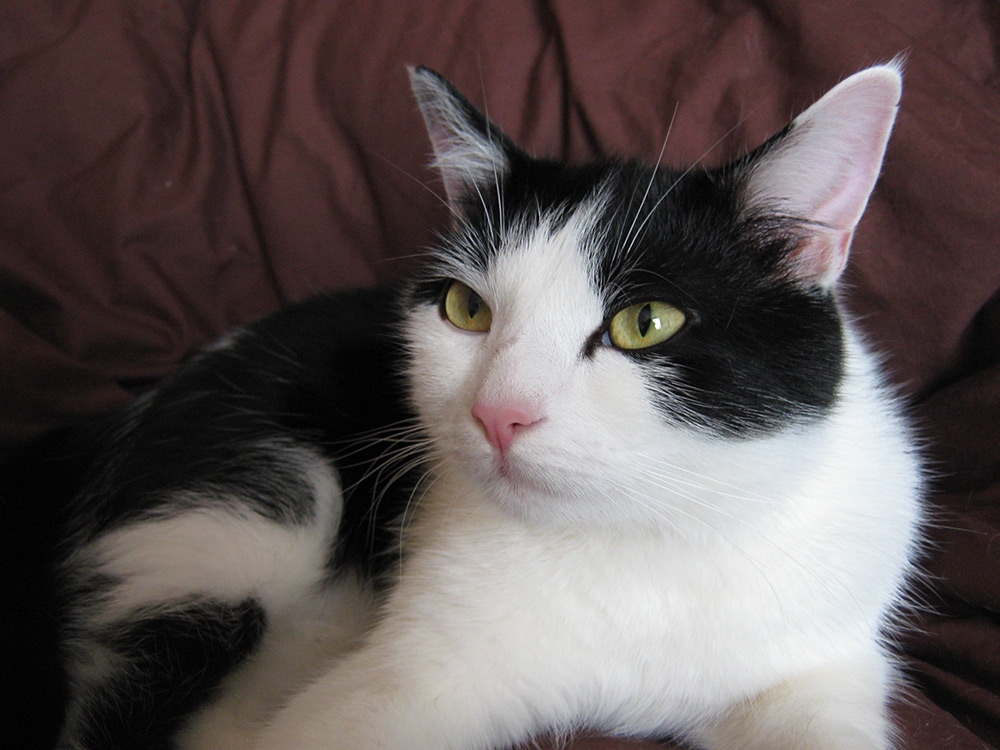 Handsome little bugger, isn’t he? Don’t let the exterior fool you, he was quite scratchy-scratchy! Never in a particularly aggressive manner, mind you.

Here’s Smoky, being a bit herp-derp: 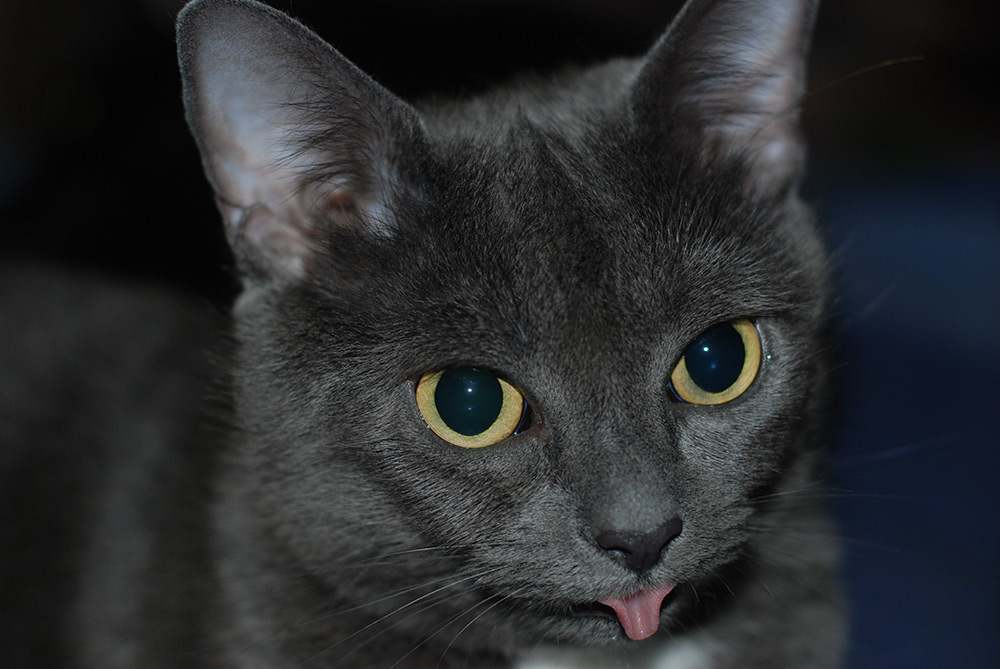 Smoky seemed to be very attached to me and spent a lot of time hanging around me. I was gutted when the relationship ended and Kat took Smoky with her, but – you know, she was her cat, so I can’t really blame her!

Being in the same flat as the three cats made me realise how awesome cats are as pets. They’re fairly chilled, don’t need walking twice a day and (if you get the right one, or two or five thousand) are just as loyal and loving as dogs.

So, a few months after Kat moved out the loneliness got the better of me, and I got hold of Nutmeg, who had been used as a breeder up until then (she’s a pedigree British Shorthair) and I think she was just glad to get out of there, really!

Lots of photos of Nutters on this website, but here’s one of my favourites: 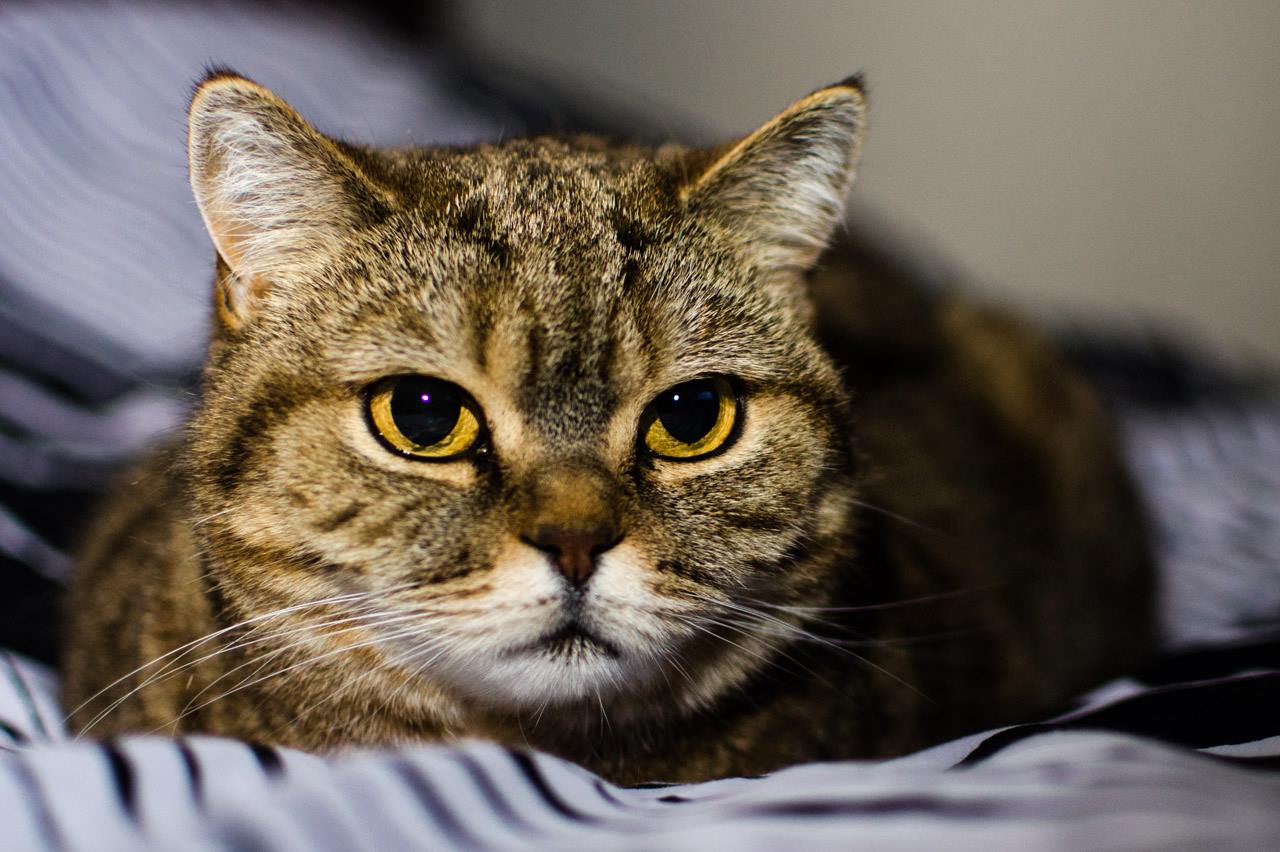 And so it stayed for a couple of years, just Nutmeg and I walking through the wasteland of life.

Then I met another gal, Alex. She had no cats of her own but had always grown up around them, and we decided to get Nutmeg a play mate. We made the mistake of getting a kitten, which essentially meant that old Nutmeg couldn’t keep up, and the new kitten (that we named Fenton) ran rings around her and it seemed Nutmeg didn’t enjoy her new friend being around at all. Here he is, though: 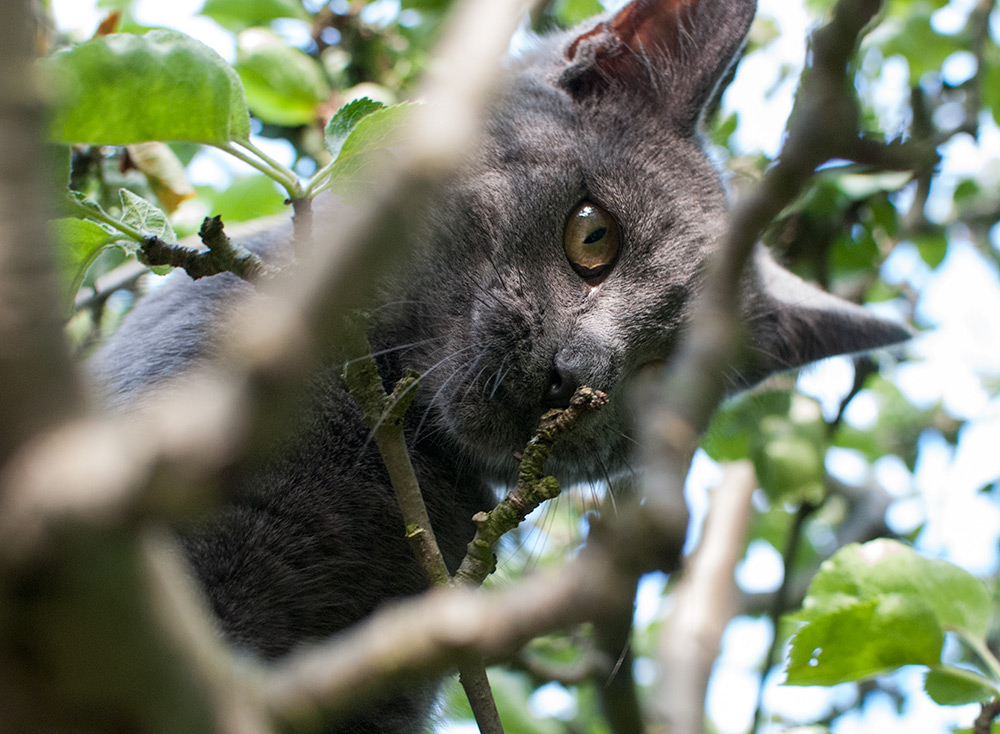 The relationship between Alex and I ended and we went our separate ways. I kept Nutters, of course, and Alex took Fenton. I was upset by this a bit at the time, but realise now that it was definitely for the best, Nutmeg really didn’t get on with him.

Shortly after, I met Jem. Another gal with three cats (there’s a pattern forming) – Crumble, Fudge and Hex. Crumble is a bit of a tart and loves a fuss, but now that Jem has started letting her cats outside, we barely see Crumble any more so typically I’ve not been able to get a photo of her.

Fudge is a very nervous cat but is slowly warming up to me – he even came and gave me a boop this morning while I lay in bed, unprecedented behaviour. It might have just been because he was hungry, but I choose to think not.

Hex is the most laid back and patient cat I have ever met. He will just lie there and take whatever fuss you give him, and short of throwing him across the room I can’t think of anything I could do that would make him get up and walk off. I wanted to get into my sleeping bag this morning (I often sit at my desk in the sleeping bag, as it keeps me warmer) but he was lying in it. I picked it up, thinking he’d move but no, he just fell right down into the bottom of the sleeping bag.

He would have stayed there too even with my feet next to him – he made no effort to climb out. I had to grab him out of it and put him back on the bed.

Fudge and Hex are like best buds, they spend most of their time curled up in each other’s paws. Take a look: 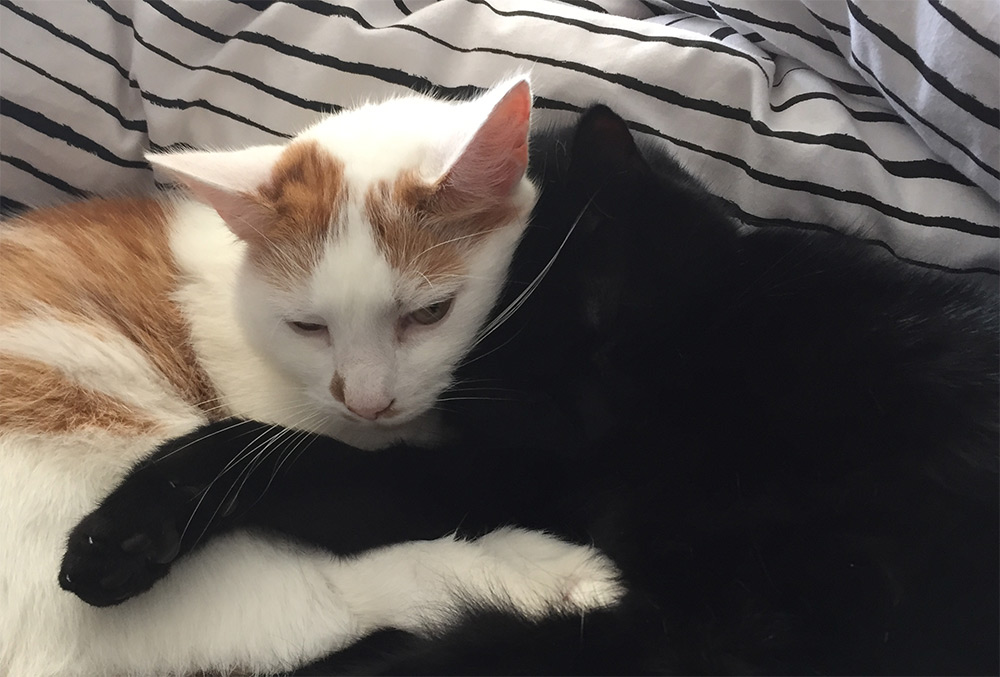 Fudge on the left and Hex on the right. Hex also ably demonstrating here why I have no good photos of Sooty.

Before I moved in with Jem, I did get a rescue cat in a bid to keep Nutmeg company again. A 5 year old tortoiseshell cat named Gizmo. Unfortunately though, Gizmo and Nutmeg really didn’t get on (it made Fenton look like the Pope) so I had to put Gizmo back into the rescue centre – but she’s found a happy home again now!

Fortunately, Nutmeg now seems to get on pretty well with all of Jem’s cats. There was quite a bit of hissing and head-bapping to begin with, but things seem to have settled down now and they can all share the same space without incident: 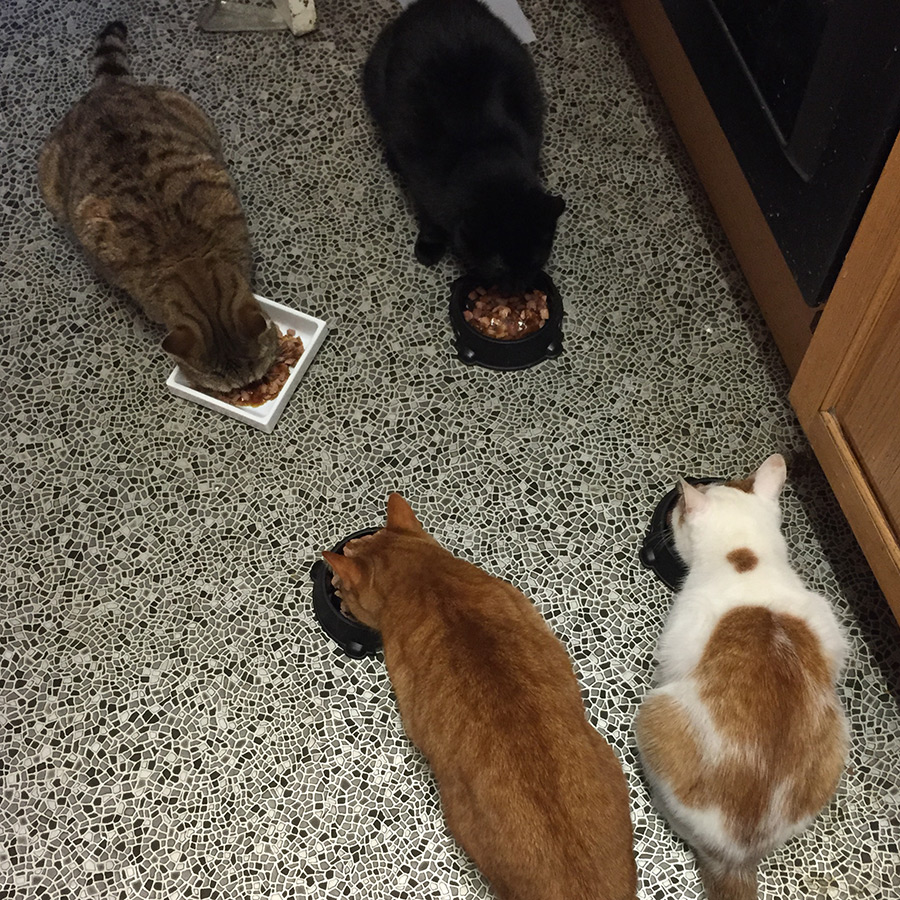 And that’s basically it – my cat history in a single post.

To end this post, have another photo of Fudge and Hex, this time in the middle of one of their play fights… 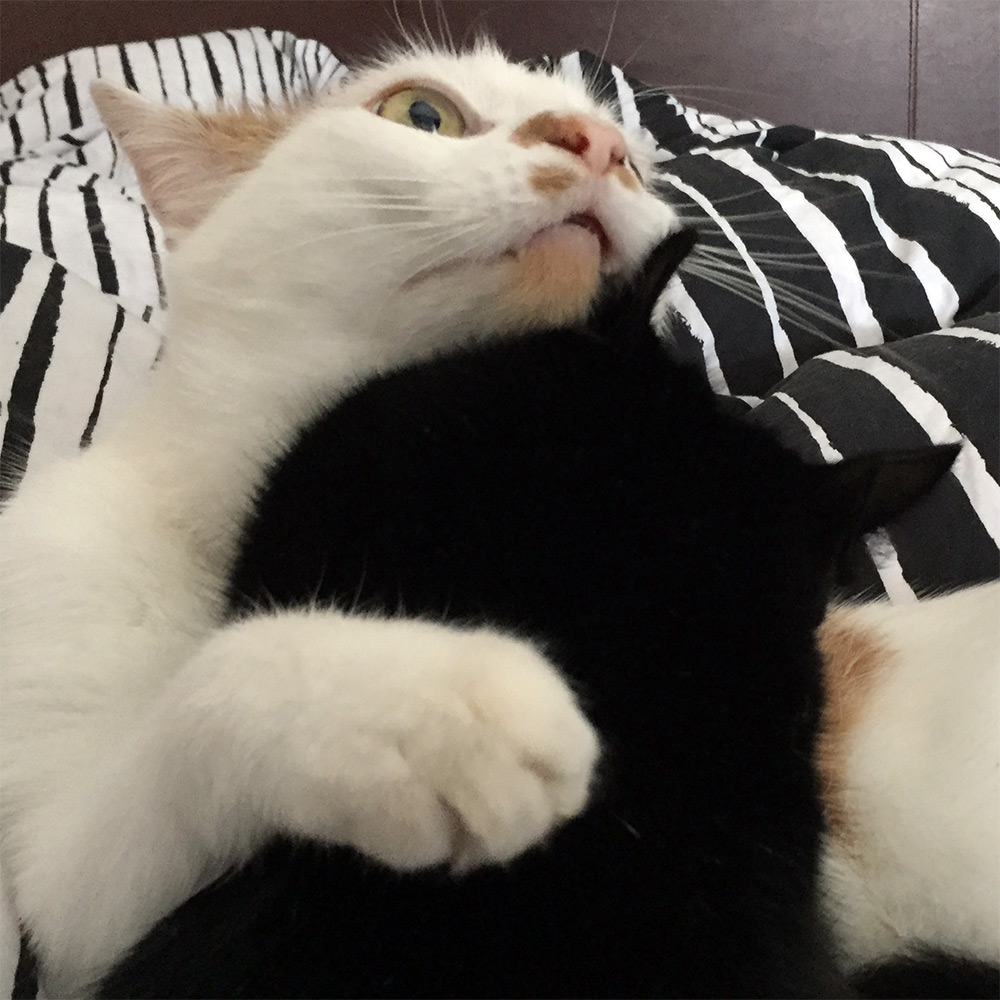 “Don’t listen to them Jeremy. You’re beautiful, and I love you.”