I would, certainly. But since I no longer play the lottery, and the topic of this post is a quiz show that isn’t the titular programme, I guess it’ll have to wait.

I’m sure those of you who follow me on Facebook and Twitter (all two of you, anyway) will have seen a plethora of posts turn up on those respective platforms about this, but this evening I (along with Jem and my three brothers) appeared on BBC2, taking on the might of the Eggheads.

You can watch the episode here, until the 5th October anyway.

If you don’t want to watch it, or the link’s broken because I’ve forgotten to remove it after the fact, here’s me in glorious Eggheadovision: 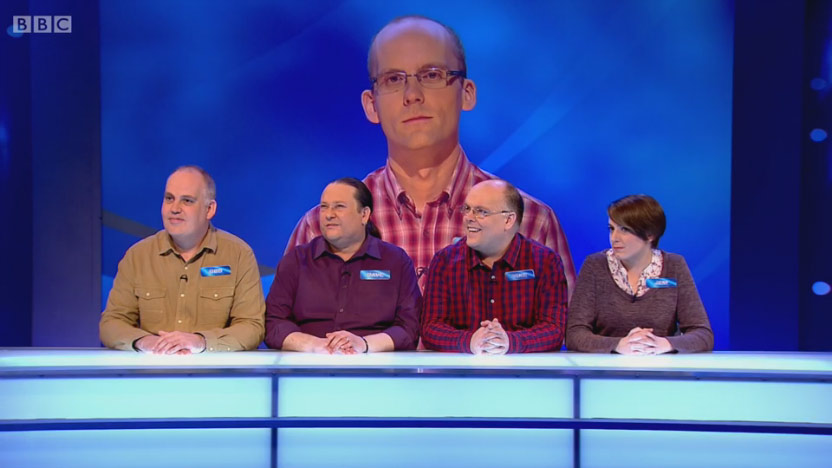 We travelled up to Glasgow in January this year to record the show, after auditioning a few months earlier and apparently wowing the judges enough with our mad quizzing skillz to secure a place in the series.

Now that the programme has aired, I can tell you more about how the day went. I will do it in the form of a Frequently Asked Questions section, which is handy because in the past 9 months I’ve had a lot of questions asked about it. Let’s start with the most frequent:

A. Yes, and it’s been and gone. If you missed it and can’t now get it on the link that is in the post, then don’t worry – you’re not missing much.

Q. Is CJ as smug in real life as he is on the telly? I’d really like to punch him in the face.

A. No, in person he is as nice as pie – although it seems somewhat odd that today is the day that revelations of him apparently killing a mugger have come to light. His smugness is, as it is for many TV personalities I imagine, probably just a character.

Or maybe he is actually that smug in real life, but he just hides it when fraternising with the “normals” – who knows? I liked him, anyway. But then, some people think I’m a bit smug. Hopefully none of those people want to punch me in the face, though.

Q. Do they tell you to faff around before getting to the answer, even if you know it?

A. No, quite the opposite. They go to some lengths to tell you that if you know the answer, just come straight out with it rather than try to pussy foot around coming up with some sort of justification for the answer. Of course, that didn’t stop my brother Mike, who dilly-dallied around a bit on a couple of questions.

A. No. Still, never mind, eh? It was a good laugh and that’s all that matters – and it didn’t actually cost us anything to enter (the production company put us up for the night and paid our travel expenses and what not)

Q. Is Dermot Murnaghan as nice as he seems to be?

A. Can’t answer that one, Dermot no longer presents Eggheads – we were hosted by the (quite lovely) Jeremy Vine. Interesting that Tim Vine is his brother, they don’t look that much alike to me.

A. Surprisingly straightforward. I kind of imagined that it would be all “CUT!” and “ACTION!” (except in the reverse order, natch) of different parts that they would then edit together, but we recorded it in exactly the same order that it was shown. In fact, apart from general guff between bits of the recording, nothing really landed on the cutting room floor. The only exception was during Mike’s sudden death round. Judith and Mike battled it out for around 8 questions or so in the sudden death round, which I guess the producers felt went on a bit long so they trimmed it down a bit.

Q. How many episodes do they record in a day?

A. I seem to remember Jeremy and the Eggheads (good name for a band, that) saying that the day we were recording was quite unusual because they were recording five episodes. That’s a long work day, it probably took us around 2 hours to get everything recorded, not including time spent in makeup etc.

Q. How long did you spend in makeup?

A. About 10-15 minutes, although Jem took longer – not because she’s ugly or anything, but they seemed to want to “doll up” the female contestants. As someone who doesn’t wear make up usually, Jem wasn’t keen, but here she is: 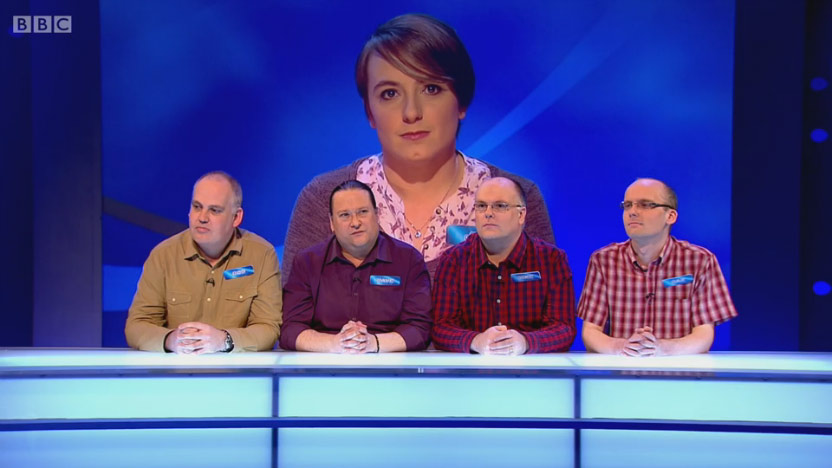 Q. Would you do it again?

A. Absolutely, without question. It was a great day out, a great experience, and super good fun. It’s just a shame we didn’t win, but never mind, eh?