Turning over a new Leaf

As I mentioned in one of my posts just the other day, I’ve been driving for 11 years now – I passed my test in August 2004. Since that time, I’ve gone through cars like most people go through underpants – 22 of them to be precise – pretty much two a year.

I started out with fairly small and slow cars, as would befit a newly qualified driver, and slowly progressed through to 500bhp monsters like the V10-powered BMW M5.

My tastes over the last few years have been for Vee-engined BMWs in general, to be honest – primarily V10 and V8 gas guzzlers, to be precise. The two V10 M5s would regularly achieve such heady heights of 12 miles per gallon – which, at today’s petrol price (£1.07 per litre), with my current work commute (18 miles each way) would see me spending a whopping £14.57 per day to get to work and back – assuming 20 work days per month, that’s nearly £300 a month – and that’s just for my work mileage, not even taking into account other journeys.

Plus of course, there was tax to consider – £505 per year for the BMW. Plus servicing and maintenance/repairs costs, which could have potentially been a wallet-killer on an older BMW – I once had to pay near enough £3,000 for a clutch and flywheel replacement on my first M5.

On top of all that, there’s the money to pay for the car in the first place. In other words, owning these damn cars hasn’t been cheap.

Something had to change.

Why don’t you make like a tree, and leaf?

So, it was with some excitement and also nervousness that I approached my local Nissan dealer a month and a bit ago and enquired about loaning one of their Nissan LEAF electric vehicles for a four day test drive.

I’d been following the development of electric vehicles with much interest over the last few years, a pal of mine up in Scotland* has long been a proponent of EVs, and often posted on Be Excellent To Each Other about his latest custom projects, but they never really appealed – probably because of the Clarksonist tripe often spouted about them.

However, the media coverage of the Tesla Roadster and Model S, and the frequent musings of Red Dwarf and Scrapheap Challenge star Robert Llewellyn, another strong advocate of EVs, made me sit up and pay attention.

Anyway, Greenhous Nissan in Telford were more than happy to loan me a LEAF for a few days. It ended up being a 48 hour test drive as they unexpectedly sold the demo car and had to have it back for preparation, but my experiences over the 48 hours convinced me that EVs are the future, and I paid a visit to the dealership the week after handing the car back and placed an order for my own LEAF.

I picked it up yesterday, and here it is, resplendent in the free Flame Red paint, because I was too much of a cheapskate to pay extra for metallic paint and the only other option would have been white – and cars don’t look good in white unless they’re also covered in Castrol livery! 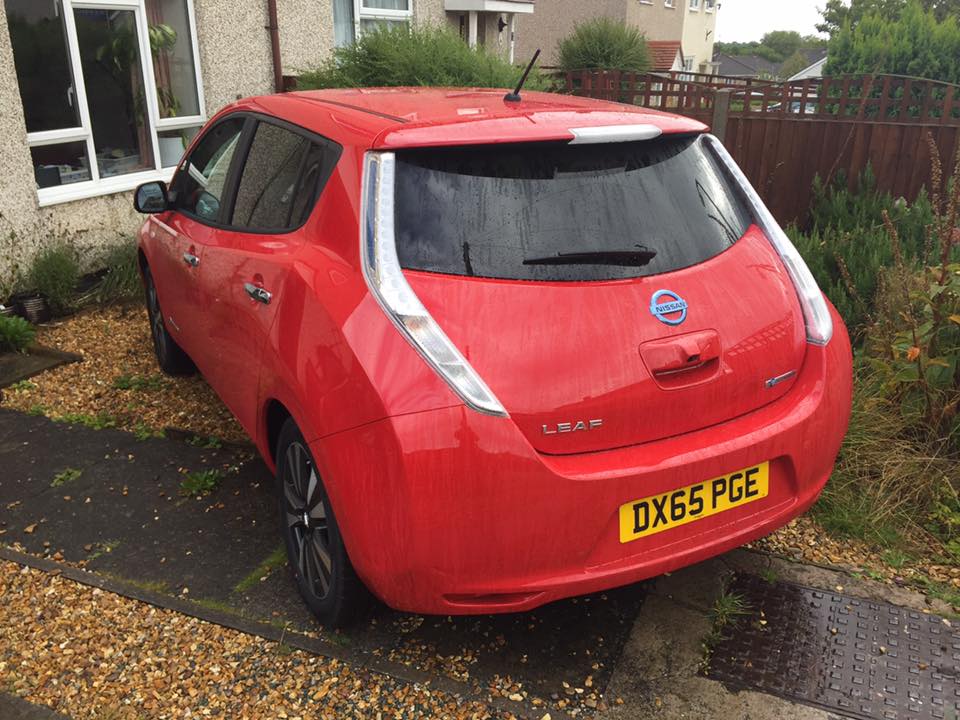 So, let’s cover off a few of the questions that are often raised about electric vehicles – and again, as with my Eggheads appearance, I’ve been asked quite a few questions, so here they are in roughly the order in which I’ve been asked them the most:

Q. Electric? Have you gone mad? I thought you were supposed to be a “petrolhead” – the clue’s in the name!

A. Yes, it’s fully electric, and no I haven’t gone mad. As for being a petrolhead – I would argue that a petrolhead is someone who has an interest in cars in general, so that hasn’t changed. There’s no denying that the LEAF is interesting, and besides, I’m keeping the Celica.

Q. How far will it go on a single charge?

A. Official figures are 120 miles (on the New European Driving Cycle) but these figures are always a bit out of whack. Real-world usage by others suggest a realistic maximum of around 85-90 miles depending on driving style, weather conditions, outside temperature etc.

A. Well, not compared to most petrol/diesel cars, no. But the LEAF will be fine for 95% of my day to day driving, and if I do need to make any longer journeys, then a number of options are open to me:

To be fair, I’d probably take one of the first two options simply for convenience – but they’re all viable.

Q. How long does it take to recharge?

A. That depends on the charger, and of course how full the battery is already. From 0% to 80% would take around 11 hours on a 3-pin domestic plug socket, or around 4 hours on a dedicated home charger, or 20-30 minutes on a rapid charger.

I’m having a home charging unit installed tomorrow (at a greatly reduced cost, as the Government provide grants for doing so) and Ecotricity have a growing network of rapid chargers installed at most motorway service stations, so a quick 20 minute stop off every hour and a half isn’t too much of a problem.

Plus there are loads of publically accessible charging points dotted all around the UK – see Zap Map for proof!

Q. It’s not the best looking car, is it?

A. It’s alright – the arse end is a bit challenging, but I quite like the look of it.

A. At first, quite odd. It’s almost completely silent, it is incredibly smooth and vibration-free. Even at speed there’s almost no wind noise
and the ride quality is incredible. After taking my 48 hour test drive I got back into the BMW and starting the engine felt positively neolithic
with it’s loud burbling and vibrations – and I like the sound of V8s!

Q. How much money is this going to save you?

A. In terms of the cost of paying for the car, it’s about as much as I was paying for the BMW, but the LEAF is brand new. Consequently, it comes with a full manufacturer’s warranty so I don’t have to worry about paying for repairs. Maintenance is virtually non-existent thanks to there being almost no moving parts and fluids, so servicing costs are minimal. It costs me nothing in VED (road tax) as EVs are exempt, and even my insurance is cheaper.

The best part though is that to “refuel” I just have to plug it into my house, and I’ll end up paying around 2p per mile – meaning that my daily commute will cost me, at most, just 75p or so per day.

Q. Coming from a 7-series BMW, this must be like driving a Lada by comparison, right?

A. Not at all. It has just as many mod-cons as the 750i, and even some more on top. A BOSE sound system with Bluetooth audio capabilities and iPod/USB playback (not even the 750i had those!), heated seats, a heated steering wheel, reversing cameras (and even an “All Round View” camera which shows you your entire surroundings: 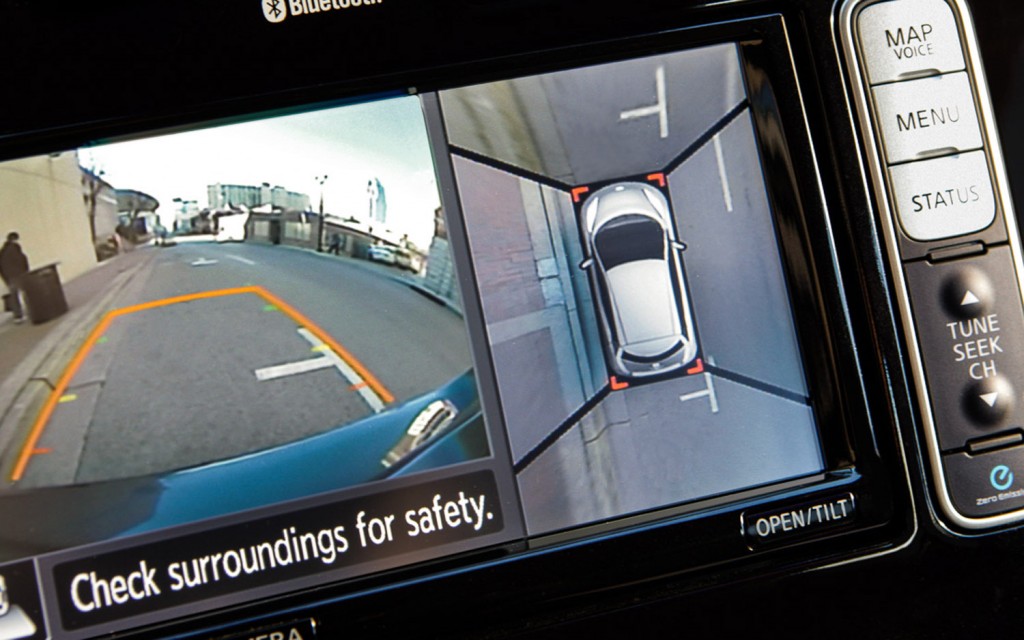 (picture from the teslamotorsclub.com forums)

Plus, of course, I can plug the car into the house to charge and have it set to warm itself up for me in the mornings so that by the time I get into it to go to work, it’s already nice and toasty warm – it’ll even turn the heated steering wheel on for me for 15 minutes before departure if it’s cold enough.

Q. It’s not really that environmentally friendly though, is it? I mean, the electricity is still being generated by coal!

A. Well, I’m not doing this for the environment (although it is a side benefit) – but consider that most internal combustion engines are, at most, approx. 20% efficient – i.e. for every litre of fuel they use, only 20% of the energy released goes towards moving the car. Electric vehicles are closer to 65% efficient – so even though fossil fuels are still being burned to power them, you’re getting more for less – and of course, as more green energy sources are used, electric vehicles become greener without needing to change anything on the car.

Q. Yeah, but if everyone drove electric vehicles, the National Grid would crumble under the strain!

A. Not really. It takes a huge amount of energy to refine crude oil into petrol and other fuels. If everyone switched to EVs, we wouldn’t need to refine as much oil so that energy usage would be brought right down, making more capacity for EV charging!

You’re a convert, then?

Yeah, pretty much. The technology can only get better, battery life (and therefore range) can only increase – it’s an exciting time to get in on the ground floor.

Hell, my lease on the LEAF lasts for two years and then I have to hand the car back (or buy it I suppose, but that won’t make much sense as technology will have likely moved on by then) – so in theory I may have even saved enough in fuel costs etc. that I’ll be able to switch it for a Tesla Model S…

No-one would have believed…

For all intensive purposes