They’re comin’ out of the goddamn walls, let’s book!

Arthur C. Clarke once said, “Two possibilities exist. Either we are alone in the Universe, or we are not. Both are equally terrifying.”

X-COM: UFO Defense (or, to give it its European name, UFO: Enemy Unknown) was developed by the Gollop brothers, Julian and Nick and was released in 1993 by Microprose to an unwitting audience.

With it’s crazily in-depth layering of micromanagement, strategy and turn-based tactics, the game was a great success and went on to spawn it’s own franchise, from the enjoyable-but-flawed sequel Terror From The Deep to the frankly abhorrent first-person shooter X-COM: Enforcer.

I was introduced to the original game on the Amiga, by a friend of mine who didn’t make it at all clear to me just how addictive the game was – so my obsession with X-COM is all his fault.

Attack of the Clones

Over the years, many software development teams have tried and failed to recapture the essence of what made the original X-COM so involving and enjoyable. The list is surprisingly long, and this list probably isn’t even complete:

Note that despite the fact that most of these titles use “UFO” in the title, the only ones that are closely related to each other are the UFO: After* series of games, which got progressively worse as the series went on.

Of those listed, the one closest to the original is OpenXcom, but that’s only because it’s literally a clone of the original game, just written using open-source languages and in a way that anyone can modify. It’s not finished yet, either. Xenonauts is the next closest, but this also isn’t finished yet. It did have a very successful Kickstarter campaign though, so hopefully it will end up being just as good.

This entire situation changed fairly recently however, as we (finally) get to the point of this post… 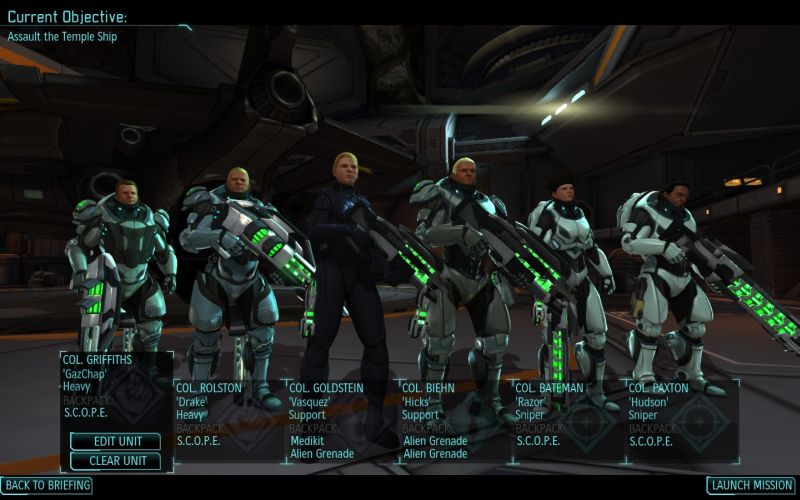 Officially announced in January 2012, and developed by a team of 50-60 developers at Firaxis Games (led by Jake Solomon), this remake of the original set hearts alight (especially mine) pretty much from the off. After so many attempts, surely the people at Firaxis could do the original justice?

Each preview and snippet of new information brought about equal feelings of joy and trepidation, as it became clear that the game wouldn’t be just a straight-up remake of the game, but a new twist on the formula.

For example, the news that the original game’s Time Units were to be scrapped and replaced with a simpler movement-action system caused much controversy, as did the revelation that your squad of soldiers would be limited to six, maximum. It seemed that the developers at Firaxis had no idea what they were doing. Gone were the days of bringing 20 soldiers to a terror mission.

A playable demo of the game was released in late September, which did the game no favours to be honest. In hindsight, the demo clearly wasn’t targeted at X-COM afficionados, but at people new to the series and to turn-based strategy games in general. It was ridiculously linear, featuring just two missions – one of which you had no real control over, with the game giving you explicit instructions on what to do next from start to finish.

Nevertheless, whilst many denounced the game as yet another failure, some (myself included) saw past the terrible demo and began to realise the potential. The movement-action system was better – Time Units now seemed arbitrary and a needless abstraction of what a soldier was capable of, and from what we’d seen in the demo the smaller squad sizes didn’t seem too restrictive.

I pre-ordered the game off the back of the demo, something I never thought I’d do – after so many crushing disappointments in the past, I figured I’d always wait to see what the next X-COM wannabe delivered before parting with my hard-earned dosh.

On October 9th, the game was released proper. Technically not available until the 12th in Europe, I used a proxy in the US to unlock the game on Steam a few days early, and dived straight in.

I was hooked. The game was dripping with atmosphere, and while it isn’t without it’s faults, it very much deserves to hold the X-COM brand.

So far, I’ve clocked over 90 hours on the game – most of which were originally intended to be short sessions in the evening that ended up stretching out to 1am or 2am. I was a tired boy for much of mid-October.

So, what makes XCOM: Enemy Unknown a worthy successor? Well, it carries across the majority of what made the original so good:

Strategy: The new classes system for your soldiers (Assault, Support, Heavy and Sniper) means that each soldier specialises at certain things. Initially this seems like a restriction, but as you learn to play the various classes so that they complement each other, you realise it’s far better. This, combined with the ability to flank enemies, and the cover system in the game, actually gives far more depth to the strategy element of the game. In the original, it tended to be simply “move one square at a time until you see an alien, then shoot and hope you hit.”

Research: while slightly simpler, is still just as important as in the original. You’ll be going nowhere fast without a solid research strategy.

Manufacture: this has also been simplified, and not entirely for the better, but it is certainly more forgiving – which is good, given how punishing the game can be.

Missions: From the horrifying atmosphere of a Chryssalid terror mission to the relative tranquility of a UFO crash site, the range of missions is still just as deep. The only real loss are the Base Defense missions, but in practice they usually ended up being a bit of a meatgrinder anyway.

Difficulty: If you play the game on Classic difficulty (or Impossible, if you’re a nutter) the game is punishing. Even the tiniest mistake can cost you your entire squad, and although the game gets progressively easier as you gain a handle on the alien technology and turn it against them, it’s still stonkingly easy to make a bad move and have your entire squad nullified by a chain of panic attacks.

Music: The soundtrack by Michael McCann (of Deus Ex: Human Revolution fame) is atmospheric and subdued. There’s even a little nod to the original that plays when you get the results of your psionic testing through from the Psi Labs.

Psionics: The range of psionic abilities has been expanded, you’re not just limited to panicking aliens and mind control, there’s now a greater choice of abilities, each with benefits and drawbacks.

Story: The story in the original was largely “make it up as you go along”, with bits of flavour added in the form of research reports. Here, there’s a plot running in the background, punctuated with cutscenes and story missions, that adds atmosphere and a sense of progression. As a downside, it makes repeat playthroughs a bit samey, but this isn’t much of a problem.

Hair: The famous “Guile hair” makes a comeback if you have the right DLC installed.

And that’s not all, but this page is already getting too long.

It ain’t all good, though. The game isn’t without it’s faults:

Interceptions: These were pretty basic in the original, but they’re reduced almost to “random chance” in this version. Short of a few buffs you can apply to your interceptor, there’s nothing to do but sit back and watch your fighter take damage while it tries to down the UFO.

Variety: As with the original, the aliens that you face get progressively tougher as you go through the game. However, unlike the original, once this “ramping up” happens, it’s very rare for other alien species to show up. In the original, you could still face a UFO full of Sectoids or Floaters in the later stages of the game, but in XCOM:EU, after a certain point in the story you’re pretty much stuck with Mutons (and later, Ethereals) – this gets very boring after a while, and only makes you want to finish the story rather than stretch it out.

Bugs: Fortunately not too many, but there are some strange line-of-sight bugs in the game that repeatedly frustrate, along with a particularly bad bug that can cause an alien (or multiple aliens) to teleport directly into the middle of a group of your soldiers, seemingly at random. Typically, this tends to happen the most with the tougher aliens – the sort that you really don’t want to find yourself facing down from two squares away.

Activity: As the game progresses and you get a handle on keeping panic levels in check across the globe, the level of activity on the Geoscape drops dramatically – sometimes you can go for a week without seeing anything, even with full radar coverage. In the original, as time progressed the invasion got tougher, often with multiple UFOs active at any one time.

Over-simplification: I understand why they chose to go down this road, but the Geoscape itself is a little bit too simple in this version. Gone are the multiple bases, multiple troop transporters, day/night cycles and much of the base management. Much of it could be deemed unnecessary, but it did at least give you something to do while waiting for UFOs to appear on the radar.

To sum this all up though: After so many disappointments, I thought I’d never play a good X-COM game again. Firaxis have proven me wrong, though. OK, so it’s not quite as in-depth as the original, but it’s a bloody good game in it’s own right and, if I’m honest, I can probably see me going back to XCOM:EU far more often than the original. The enhancements have spoiled me.

I can’t wait to see where they take the series from here.