One of the features that stood out to me during the iOS 6 announcement at the recent Apple WWDC 2012 conference was Guided Access. Apple’s website says:

“Guided Access helps students with disabilities such as autism remain on task and focused on content. It allows a parent, teacher, or administrator to limit an iOS device to one app by disabling the Home button, as well as restrict touch input on certain areas of the screen.”

The reason I was looking forward to it is slightly different, however. During the course of my work, I’ve had to develop a few web applications for use on iPads and other iOS devices that are designed exclusively for use in kiosks or similar setups, and Guided Access sounded a bit like a “kiosk mode” – similar to the iPads you see in Apple Stores demonstrating product features.

The feature didn’t seem to work at all in the first release of iOS6 beta, but the update to beta 2 has given some insight into its operation now, and I have to say I’m a bit disappointed.

Obviously, my intended use for Guided Access isn’t really what it’s supposed to be used for, so I’m not expecting much to change
in the beta releases prior to the official launch, but it would be great if they could add a few more options to the system that might make it usable for developers like me.

What’s wrong with it, then? 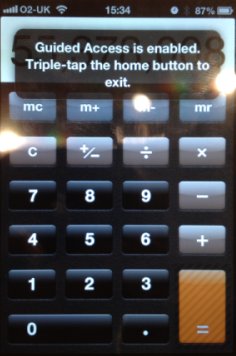 Well, not a massive amount – it has to be said. The only two things that really bother me are visible in the photo to the right (I couldn’t take a screenshot of the actual screen, incidentally, as Guided Access disables the home-button which means that the Home+Power screenshot shortcut doesn’t work.)

Firstly, when you tap the Home button while Guided Access is enabled, the screen pops up an alert to tell you this, and how to get out of it. Now, you can put a passcode on Guided Access to prevent any Tom, Dick or Harry from disabling it, but it would be great if you could set it up to not show this popup, and perhaps even create your own button combination to disable it.

Secondly, in Guided Access mode you can set up areas of the screen to be blocked off to user input – I’ve blocked off the equals button on the calculator app in the photo. The device represents these blocked areas with the use of a “hatched” pattern over it, which means that as a kiosk app developer we would have to put up with these hatched areas ruining the aesthetics of the app if we wanted to use the block input feature for any reason.

And finally, and this one is probably the hardest for Apple to “fix” (if they were so inclined, these aren’t really problems with Guided Access, more issues with my own expectations!) is that the blocked off areas do not rotate with the orientation of the device. I imagine the only practical way of doing this would be to allow you to pick user-interface elements to disable rather than areas of the screen, but that’s probably not feasible from Apple’s point of view.

In short, this is really just a bit of a moan that Guided Access isn’t really usable as a Kiosk Mode function. But then, Apple aren’t publicising this feature as a Kiosk Mode so I’m not expecting much to change in the upcoming betas.

A man can dream though, right?