Games That Never Were: Arena

As some people may know, I’ve dabbled in the world of game development before. I’ve never been particularly good at it, if I’m honest, not really down to anything other than a lack of good ideas, and a lack of time to do any ideas I had justice.

It’s something I keep meaning to have another bash at, not in any serious manner of course, just in a “bedroom programmer” kind of way.

Still, I thought I’d make a post about a game of mine that never quite made it past development. It ranks as the most ambitious game project I ever undertook, and actually got quite far down the line.

The year was 2002, and the game was called Arena: Multiplayer Deathmatch and, as the name suggests, it was an Internet/LAN deathmatch game designed for up to 32 players (although I only ever tested it with 4 or 5 before the project kind of fell by the way side.)

Written in Blitz Plus, Arena was my first attempt at an Internet-enabled multiplayer game, and for all intents and purposes it worked rather well. As a game, it wasn’t really far enough along to be particularly enjoyable – there was no real objective to speak of, just kill the other players – and in the test version everyone had every weapon available from the start, so there was no real challenge.

Nevertheless, I really should have finished it – I vaguely remember showing it to some people that agreed to betatest it, and the feedback I received from the versions earlier than the one I have was positive. 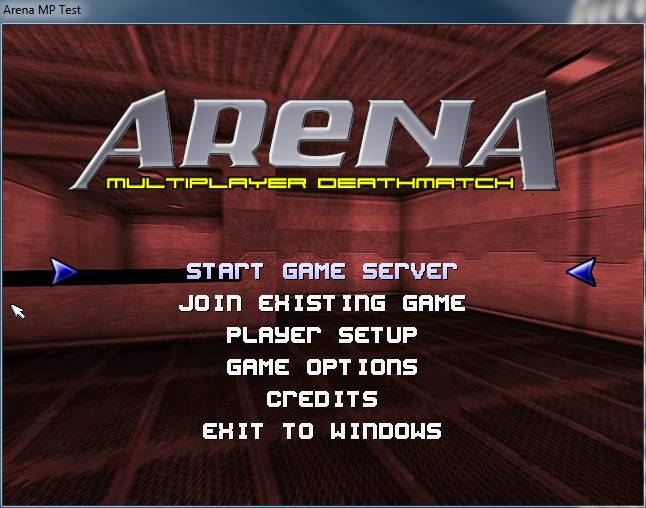 Unlike most programmers and developers, who work with “placeholder” graphics for as long as possible, one of my biggest flaws as a developer was that if I didn’t like what I was looking at, I lost interest in developing, so I used to spend a long time doing graphics for a game that, if not final, were “one step up” from placeholders.

This was the main menu screen of the test version. Only the first two options did anything (and Exit) with the first option allowing you to setup a server and start a new game: 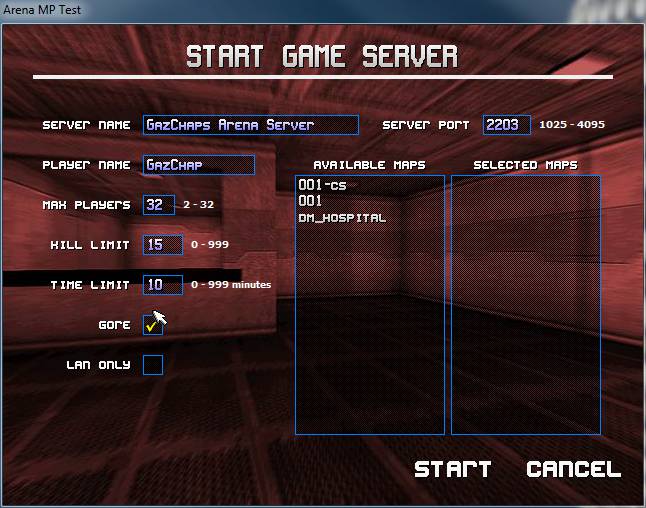 Of the options on this screen, the only thing that didn’t affect the game were Kill Limit and Time Limit, which I never got around to implementing as it was still really just netcode testing. Available Maps were pulled from a folder in the game directory, and one would be picked at random from the selected maps list every round.

Starting the game would give you spectator view at first, instructing you to “Press fire to spawn.” You could move the camera around the map and watch the action before diving in.

And here’s a basic in-game shot with just two players. I’m the green one, shooting the blue one with my assault rifle and spilling rather a lot of blood.

There were six weapons available – a 9mm pistol, a sub-machine gun, an assault rifle, a shotgun, a flamethrower and landmines. All were pretty similar, the only differences between the first three were rate of fire. The shotgun was an “arc” of bullets that fired out, the flamethrower was similar to the assault rifle, but with “bullets” that didn’t always come out completely straight and did lasting damage, and the landmines were placed on the ground behind the player and exploded on contact with another player, or after 20 seconds.

Many of you will recognise the graphics in the screenshot above, shamelessly ripped from Team17’s Alien Breed series of games. Obviously I would have changed these had the game progressed to being released, but as placeholder graphics they were nice to look at and thus kept my interest!

And that’s pretty much it – nothing else really became of the project. Who knows, maybe I’ll revisit it in the future, but I suspect the market for top-down deathmatch games is even smaller these days than it was back in 2002, when 3D shooters like Quake III Arena and Unreal Tournament were all the rage.