While compiling photos for my cat-post on Sunday, I realised I didn’t have any photos of my old cat Kipper so had to raid my parents’ photo albums.

In doing so, I found lots more photos from my childhood – although it also became rapidly clear to me that frankly no-one in my family was fit to hold a camera at the time, the number of badly composed photos or photos with crucial parts missing (either because the lens had been obscured by a fat finger, or by someone cutting someone’s head off in the photo) was ludicrously high.

Nevertheless, I managed to find photos of two occasions in my childhood which have always stuck in my mind. 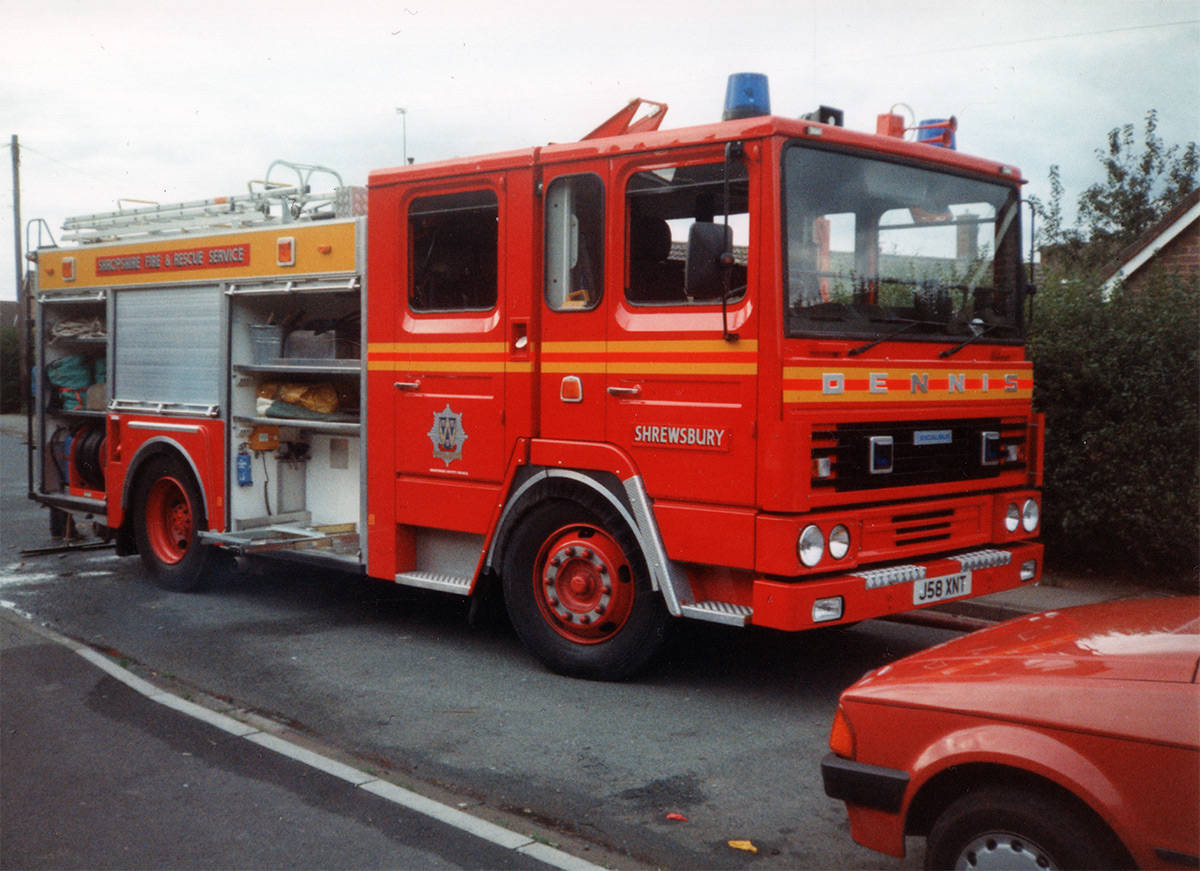 I’m not exactly sure how old I was when this occurred, but I was at primary school. My school was situated on the street next to the one I grew up on, and was about 2 minutes walk away from my home, and as such I used to walk to and from school alone from quite an early age.

On this day, my brother Mike was waiting outside the school gates for me, and informed me that we couldn’t go home as the street had been evacuated due to an explosion a couple of doors down from our house.

I was old enough to understand what this meant, so I assume I was fairly far into the primary school system. We were allowed on our street though, we just had to stay as far away from the source of the explosion as possible.

Our next-door-neighbours but one owned a VW Camper. I don’t remember an awful lot about it, other than that I think it was green or blue.

Like most motorhomes, it had gas connections and could take gas cylinders to act as fuel for cookers and what-not. Perhaps this practice has stopped now and most run on electricity, I’m not sure, but this one certainly ran on gas.

It seems that the gas cylinders in this particular campervan weren’t 100% safe, for reasons unknown. I’m sure you can guess what happened next: 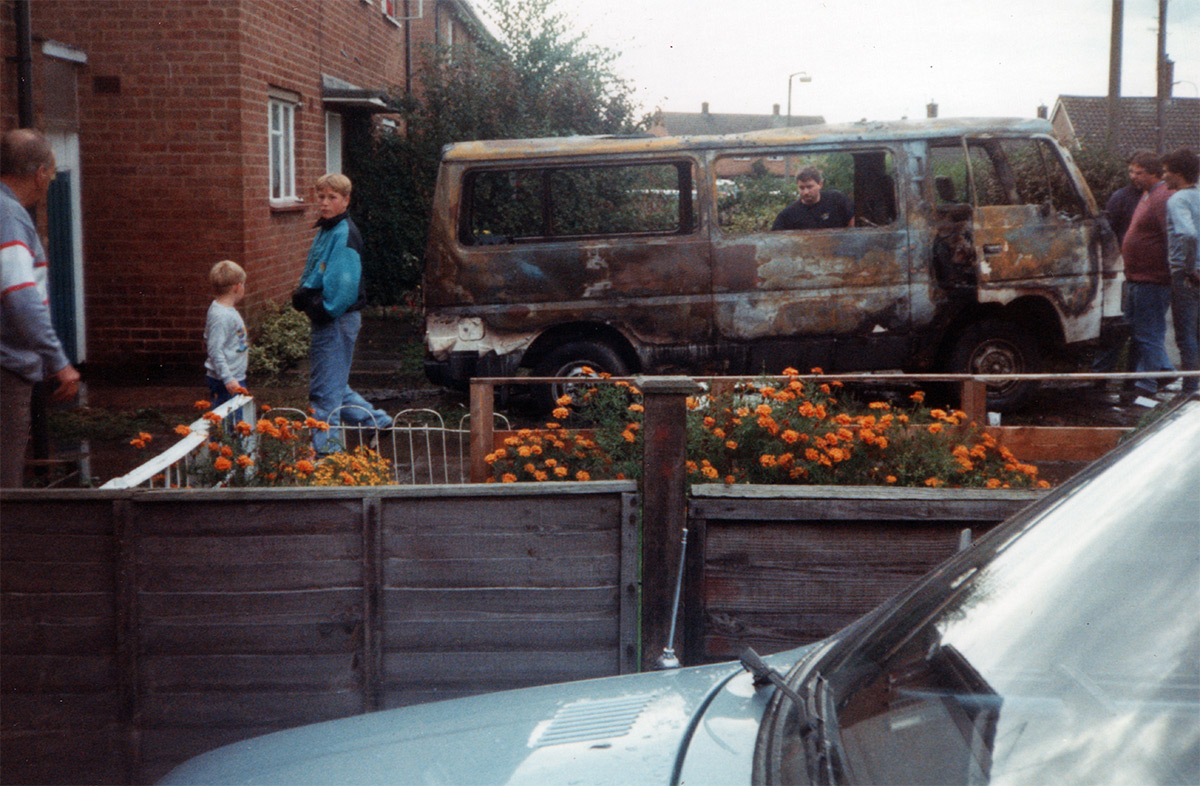 It does look like there might be some blue paint left visible there, so I guess I was right in my assumption.

Fun fact: On the left there was our immediate neighbour, Ken. Affectionately known as “Deaf Ken” to my brothers and I, as he always pretended not to hear you when you spoke to him. In later years, he grassed me up to my parents when, with a friend of mine, an air rifle and a can of deodorant, I inadvertently created a 30 ft high fireball in the back garden.

Anyway, the neighbours didn’t bother with a camper van after this incident. Probably for the best.

The holiday from hell

This should have been fun, and one of the highlights of my childhood. My first holiday abroad – to Majorca, in 1993. I was 9 years old, and eagerly waiting to see some of that Mediterranean sun.

We were staying in Peguera, and one of the beaches closest to our hotel looked like this: 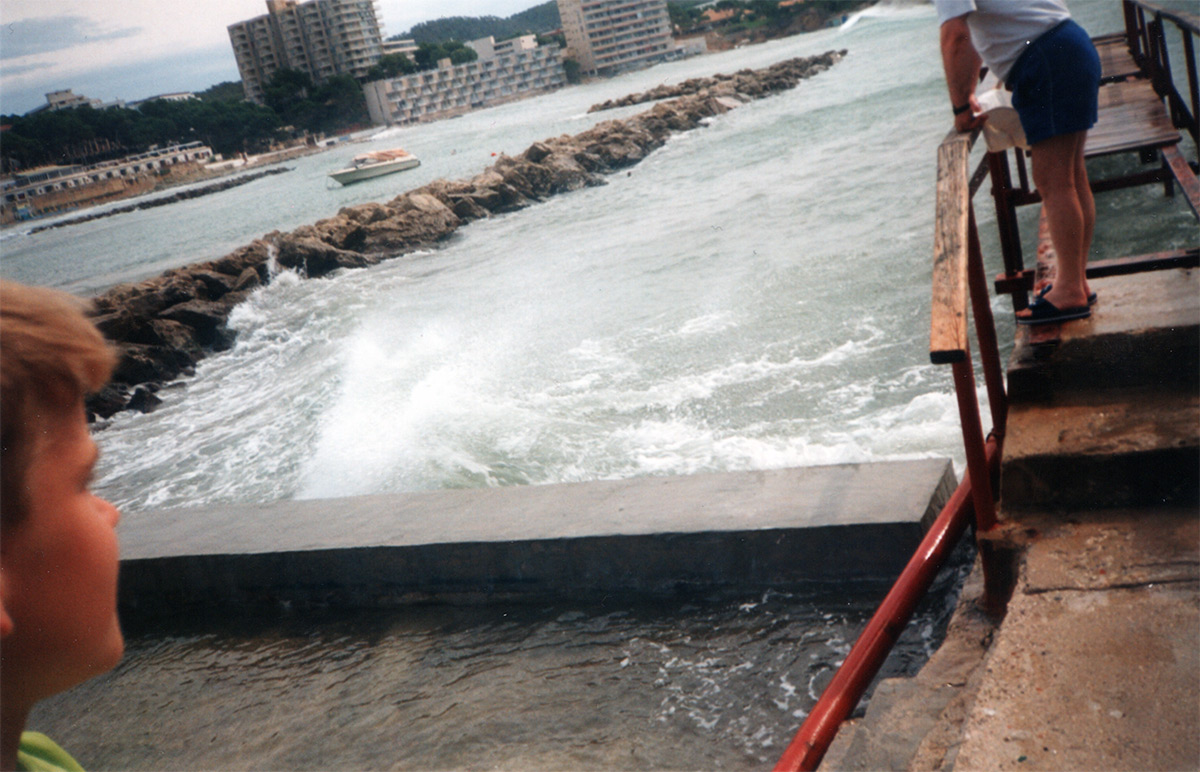 Not an awful lot of sand there most of the time, just a bit when the tide went out. Still, many of the locals used to hang around this area and fish from that little pier/jetty (which, incidentally, I can’t see any health and safety official signing off on these days!)

Truth be told, the holiday was – for me at least – mostly uneventful. I played on the beaches, I swam in the sea. I remember metaphorically crapping myself upon leaving our apartment one day just as a huge thunderclap went off overhead, making me run like hell down to the bar near the photo above to my parents.

There was one major incident for me though, which I’ll come to shortly.

But first, you see that big long line of rocks on the photo above? My Dad was walking across those a couple of days in to the holiday, and somehow slipped. He fell in to the water, where he was promptly bitten/stung by what the local doctors referred to as a “sea eagle” – it stuck a load of spines in his arse basically.

He also sliced his feet open on the rocks as he went over, and had some miscellaneous cuts and bruises too. Hence this picture: 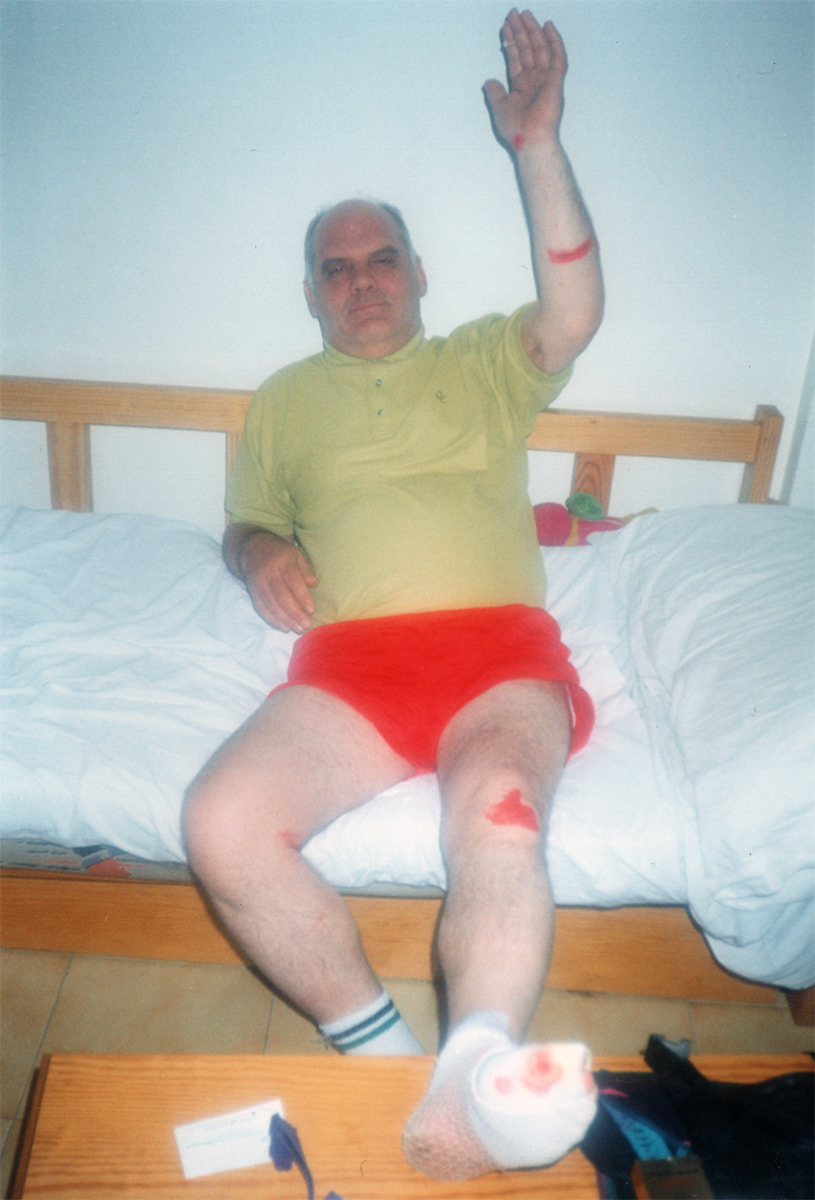 The red marks are not blood, they’re iodine or something like it that the doctors used to “mark” his injuries.

Dad then spent a couple of days laid up recovering, although that suited him down to the ground anyway!

Mum also managed to fall down a small hill and stub her big toe on a metal pole at the bottom of it, so she walked with a bit of a limp after that.

As for my incident? Well, see this photo: 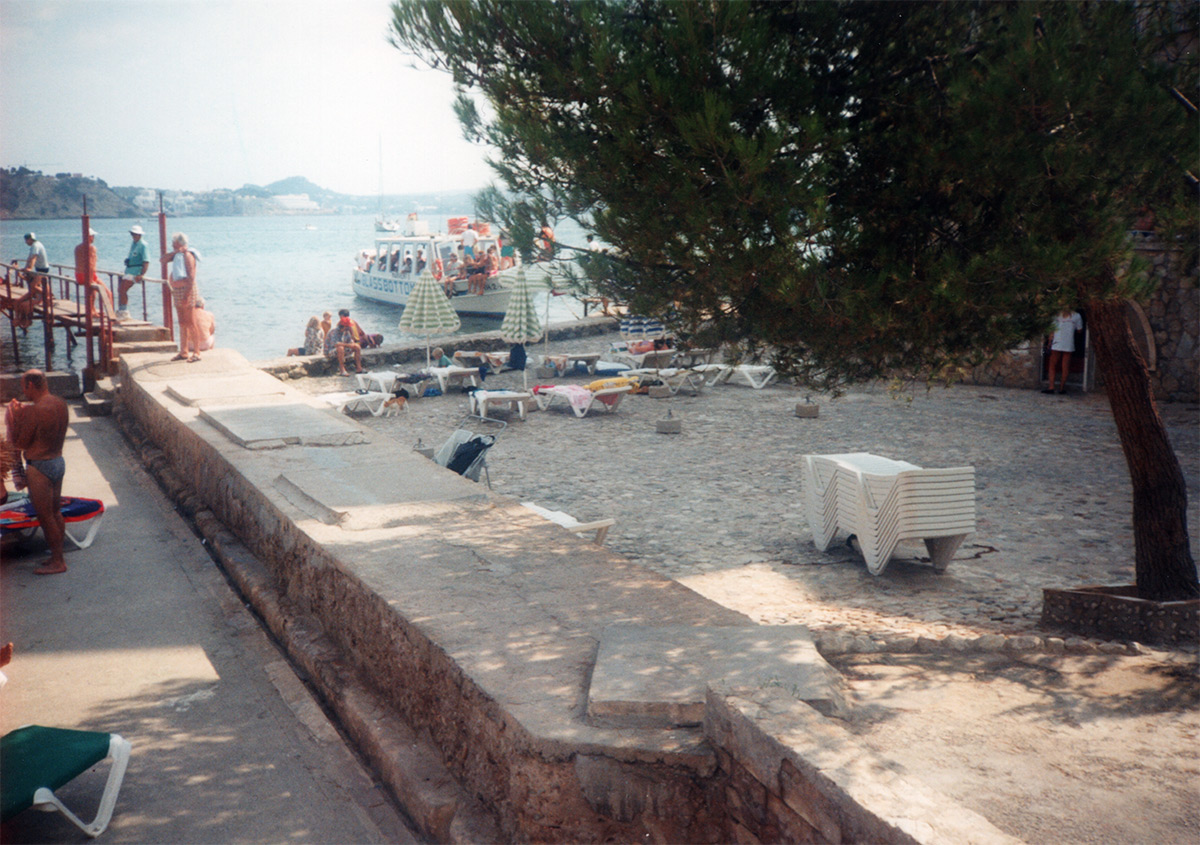 See the boat? And the umbrellas in front of it? And the little “step” between them?

Well, on the last day of the holiday, a mere eight hours or so before we were supposed to be catching our flight home, I was running across the pier/jetty thing, across that little rocky step. Unfortunately for me, it was covered in seaweed, and I slipped over and went underwater – fully clothed.

That wasn’t the worst part though – there were people fishing off that rocky bit, and consequently as I went in the water and started flailing around like an idiot, panicking and trying to get to the surface, I managed to get myself tangled up in their fishing wire.

Fortunately, the sudden tugging on their fishing rods (that and the commotion, I imagine) alerted them to the fact that something wasn’t quite right, and some locals dived in and managed to rescue me. I didn’t lose consciousness or anything, so it could have been much worse, but it really did frighten the life out of me.

It’s a jolly good job that the weather that day was, as Paula Fisch puts it, “scorchio!” as the sun dried out all of my clothes in time to catch our flight.

I’d like to say the problems ended there, but I’d be lying.

My brother Mike picked us up from Manchester airport when we landed, and we were about halfway home (so a good hour or so into the journey from the airport) when I became aware that I couldn’t see anything, and I realised that I’d left my glasses on the plane.

Oh well, they were only NHS specials – quite possible that I did it deliberately to try and get some nicer looking ones…