The Shrewsbury Flower Show is in full swing, and Alex and I decided to take a brief trip into town to check out the crowds, have lunch and perhaps go for a bit of a walk while we were at it.

Unfortunately, the walk didn’t really happen (we had to get back to the car before our parking ticket expired!) but lunch definitely happened, and I’m really rather glad it did.

About three months ago, a new eatery opened on Mardol Head in Shrewsbury. Replacing Briggs’ shoe shop, a mainstay in the town since – well, as long as I can remember – I wasn’t particularly convinced that Shrewsbury really needed another restaurant. Still, as we approached we saw a sandwich board outside advertising their Express Lunch menu – three courses for £8.95. That sounded terrific value for money, so in we went! 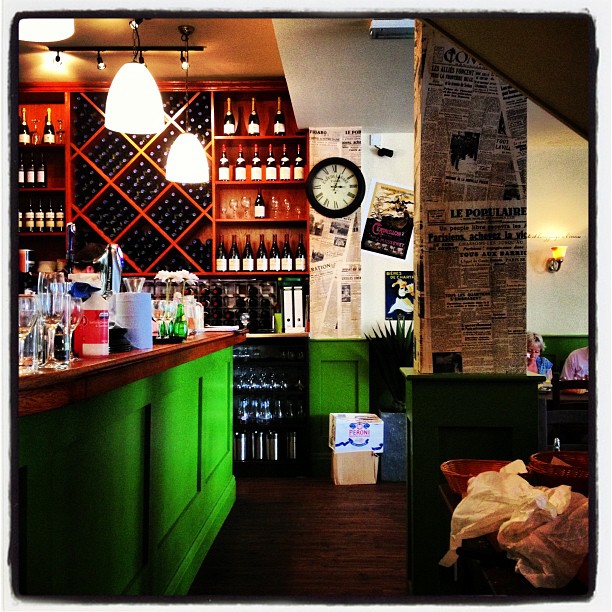 Bistro Jacques is (unsurprisingly) a restaurant with a decidely Parisian/French theme. From the moment you walk in you’re presented with excellent decor, with famous French artworks on the walls, and copies of mid-20th Century French newspapers adorning the various pillars that keep the building up.

After the decor, the first thing I noticed was the sheer number of waiting staff bustling around. I can’t be sure, but during our time there today I counted no fewer than 9 waiters/waitresses, which surprised me given the size of the place. One thing was certain, we wouldn’t be kept waiting long.

Due to the Flower Show, the place was already pretty packed, so our greeter informed us there’d be a wait of approximately 15 minutes before we could get a table, and invited us to have a drink over at the bar. We duly obliged, and the helpful bartender served Alex a small glass of white wine, and a pint of Coke (no ice) for myself while we perused the menu.

It was only five minutes later that we were shown to our table, and it was at this point I took the photo above, losing my Instagram virginity in the process.

After another short wait, our waitress introduced herself and took our orders. Alex chose the smoked salmon with salad to start, and a chargrilled pork steak with celeriac, potatoes and mixed vegetables for her main. None of the starters appealed to me (but that’s more of a reflection on my terrible taste in food) so I opted for a simple garlic bread starter and steak haché, effectively mini hamburgers made from minced steak – served with French fries and salad.

Some bread and butter was brought to our table to tide us over, and I spent the next few minutes people-watching out of the windows, watching the (large) crowds go by.

Our food came quickly, and I was presented with four slices of french garlic bread, toasted. It was perfect, to be honest – not too dry, not too moist, and with just the right amount of flavour for my tastebuds. I anticipated that it would fill me up quite quickly, so I gave a slice to Alex, who was clearly enjoying her salmon starter – wolfing it down in no time at all.

Our mains arrived shortly after we’d finished, and my first thought was simply, “I wasn’t expecting this much food for an £8.95 three-course meal deal” – a bowl full of fries and two steak burgers, and a generous helping of side salad. My only complaint about it would be that the salad was a little stingy with the tomatoes, having just two halves of a cherry tomato – but that was minor!

The steak burgers were delicious, and were perfectly cooked. They would normally have come with a bearnaise sauce but I’m not keen, so I chose not to have this. The French fries were excellent, not soggy and just crisp enough for my palate. The salad was also a nice surprise, with no dressing to speak of drizzled over the top (I absolutely loathe most salad dressings.)

Alex’s pork steak was similarly well presented, and she commented on how cool the “mini frying pan” was that her mixed vegetables were brought in. I tried some of the steak and was impressed with the flavour and texture, and – again – Alex made short work of sending it down to her stomach, so it must have been good!

After we’d finished this course, I was fit to burst and yet still had the dessert to come. The waitress brought the dessert menu over, presenting a nice selection, ranging from créme brulée to apple crumble and custard. I chose the chocolate mousse, Alex had the créme brulée.

Again, they were brought to us very quickly and we wasted no time devouring them. Alex made a point of showing me that the caramelised surface of her brulée was expertly done, and I took great pleasure in scoffing the raspberries and strawberries that were draped on my mousse – which was fantastic.

And that was that – we paid our bill and left.

My lasting impression of Bistro Jacques was that despite how busy the place was, and how efficiently and quickly our service was carried out, at no point did we feel like we were being rushed. The food was excellent, as was the service, atmosphere and all round experience.

We’ll most definitely be going back.