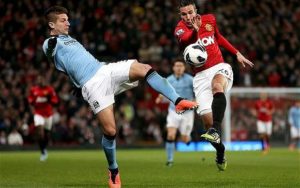 Yesterday, inspired by a work colleague and dreams of riches beyond my wildest dreams (!) I placed an accumulator bet for the first time in my life.

For those unaccustomed to betting, as I was, the principle behind an acculumator is simple – you place a series of bets (minimum of 4, apparently) and put a single stake on all of them together.

If you win all of the bets, you win the combined return of all of the odds together (although the maths to work it out is something that eludes me at 9am in the morning.)

If even just one of the bets doesn’t win, you get nothing.

So, naturally, I jumped in at the deep end and put a £14.06 bet (the odd amount was just my available balance on the particular site I used) on a series of four football League Cup matches. Had they all won, my return would have been a whopping £1,655.

Anyway, ultimately I lost. Two of the bets didn’t win, which wasn’t unexpected given that I know nothing about football other than that Manchester United play in blue and Manchester City play in red.

Still, it gave me an idea for an experiment.

Indeed – over the course of the next few weeks or so, I’ll be putting on more accumulator bets. I’ve set myself a budget of £10 of my own money.

The idea is that I will put on a £1 accumulator bet on either 4 or 5 matches, each time picking the team that is (according to league position) most likely to win.

If the bet wins, I’ll bank half of the winnings, and put another accumulator on using the other half. Every time a bet loses, I’ll go back to the £10 pot and put another £1 bet on, until I’ve used up the initial £10.

At the end of the £10, I’ll then see a) how much money I’m left with (if any) and b) what the longest chain of winning bets was.

The first bet is…

I agree with Grim... Betting is a mugs game, especially on football.

Still, it'll be interesting to see what happens.

The house always wins, and all that.

I predict you will get exactly ten goes.