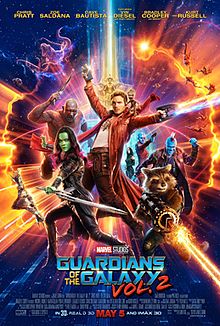 The first Guardians Of The Galaxy movie (from hereon referred to as GotG) was a smash hit for Marvel Studios when it came out in 2014, raking in over $750 million at the box office. It was considered a refreshing change from previous Marvel movies, with more humour and, crucially, a setting that did not involve Earth.

I wasn’t hugely keen on the movie, I’ll be honest. I have similar problems with many of the Marvel releases – the two most memorable films out of the entire Marvel Cinematic Universe for me have been the original Iron Man and Ant-Man. These films, despite their “superhero” roots, stay relatively grounded and remain largely believable, with strong characters that have a defined character arc and with storylines that focus on the titular character. An honourable mention goes to Captain America: The First Avenger, which also largely fits this mold and only loses it towards the end a little with the whole supernatural/occult-loving Nazi thing.

Many of the other movies in the MCU (and also the contemporary DC Universe equivalents) seem to be stuck in a never-ending arms race of tragedy and destruction, with each successive film having to think of some way of outdoing its predecessor by raising the stakes and putting our heroes in even more danger (well, as much danger as they can be in when you know that they’re all going to survive at the end because Marvel like money)

This brings me on to GotG. In the first movie, the plot centres around a mysterious Infinity Stone which grants its bearer limitless destructive power, and the heroes attempts to keep it from falling into the wrong hands. That’s pretty good, as storylines go – it has the potential to go “cataclysmic” but I don’t recall it doing so – and the Guardians eventually succeed (of course) and all is well. It also had humour, some good character development and it looked very pretty too.

So what about the sequel?

I’ll be honest, I wasn’t at all impressed. The only decent element of the first movie that has been retained in this one are the stellar (no pun intended) visual effects. Top marks to the (no doubt massive) teams of animators and other visual effects gurus that worked on this film, because you’ve done yourselves proud. From a VFX point of view, nearly every scene is an absolute delight.

“But what about everything else?”, I hear you cry. Well, let’s tackle things one at a time, shall we? This is where the spoilers begin.

The film opens with the premise that the Guardians have been hired by The Sovereigns to protect some mega-powerful and valuable batteries from some sort of intergalactic beastie. They succeed in their mission, and The Sovereigns keep their promise and release Nebula (Gamora’s sister) from captivity. The Sovereigns are horrible people that kill anybody that disrespects their race, so when they discover that Rocket stole some of the batteries they were supposed to be protecting, they launch an all out war against the Guardians – and despite repeated defeats, keep coming back for more.

I think, with a little bit of work, this part of the plot could well have been extended and become the main focus of the story. As presented, however, it ends up as a subplot – and not a good one, either – it could be completely removed after the opening introduction scene and the film would basically truck on regardless.

Aside from this, Peter’s Dad tracks him down and takes him, Gamora and Drax to his home planet (Ego) to explain Peter’s heritage – which is essentially that he is a literal god that can do awesome things as long as the planet exists. It transpires that Peter’s Dad is a bit of a player who slept around a bit, trying to create a son that shared his powers – and, having found Peter at last, wants to use him to “jumpstart” a process whereby he converts every planet in the universe to planets like Ego, killing everything on them and furthering his own power.

And thus, the Guardians of the Galaxy have to save the galaxy. Again. I suppose that was inevitable, but it’s still a bit yawn-tastic.

While all that is going on, Yondu is angry at being exiled from the Ravagers for breaking “the Code”, and then his crew mutiny and take over his ship. Yondu has the best character arc in the film – gaining full redemption and respect by the end, but if you removed him, it wouldn’t have much effect on the events of the movie – mainly due to the Sovereigns subplot being of no consequence whatsoever.

The overarching impression I got while watching all of this was that the plot was hurriedly pieced together after the writers had decided what sorts of scenes they wanted, and just needed to work out how to link the scenes together story-wise. It also felt a lot like they were just putting things in place to set up Volume 3. 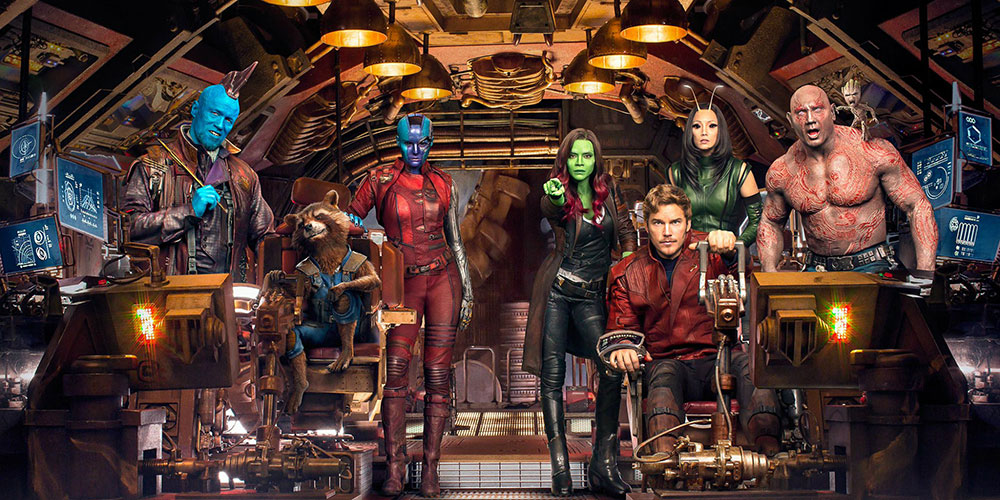 Peter Quill/Star-Lord (Chris Pratt): In the first movie, Peter was very much the main draw – the eventual leader of the Guardians, and rightly deserved. In the sequel, his role is basically reduced to looking awestruck a couple of times and making dumb jokes and wisecracks the rest of the time. Not really an awful lot for him to do, which given that a large part of the movie is about him finally getting to meet his Dad and have all of his questions answered, is a criminal waste of Chris Pratt’s talent as an actor.

Gamora (Zoe Saldana): An assassin in the first movie tasked with being a thief (I don’t get it either), but now the “second in command” on the ship. Gamora certainly knows how to fight, and fights well – there’s a few scenes where she essentially saves the day with her skills. She has no sense of humour, which I suppose makes her the “straight (wo)man” which all comedic films need to balance things out, but I’m not convinced it works here.

Drax (Dave Bautista): A hulk of a creature with a simple understanding of human emotions and social norms. As in the first movie, Drax is arguably the best part of the film – he certainly gets most of the best lines, with much of his dialogue designed to make the audience laugh at his sheer ignorance of the awful/stupid things he comes out with.

Rocket (Bradley Cooper): A raccoon-like animal that can talk and is an expert with most weapons. Tension between Rocket and Peter is a source of laughs for much of the film. Unfortunately, Rocket is the one that angers the Sovereigns and thus brings about the most baffling and pointless part of the movie (for me)

Baby Groot (Vin Diesel): In the first movie, a walking talking tree creature named Groot that was “killed” but “germinated” back into Baby Groot. An absurdly cute CGI tree with a single line of dialogue repeated ad nauseum – although somewhat ironically, it just about avoids getting old in the movie itself but is then sprinkled all through the closing credits for no reason whatsoever other than “quirkiness.” Baby Groot basically does nothing for the entire film, save for the last act where he plants the bomb that kills the Big Baddie – but it felt like he only did that because they needed to give him something to do.

Ego (Kurt Russell): The Big Baddie. Starts out benign (he’s Peter’s Dad!) but then everything goes awry in the last act, and we realise he’s an evil son-of-a-bitch hellbent on conquering the entire universe and making it his own, killing every other living being in the process. This goes back to what I waffled on about at the start of this post – there’s no need for them to have this cataclysmic problem that needs a resolution, the plot was just fine without it but it’s a summer blockbuster so there needs to be a baddie that gets quashed, and they need to raise the stakes even higher than they were before which leaves them nowhere to go.

The others: There are various other characters; Mantis, Ego’s “pet”, who provides a little comic relief and exposition but who otherwise could be removed entirely; Yondu, an exiled Ravager, who has the only decent character arc in the entire movie, but who has an amazing superpower that should by all rights render him unstoppable, until he gets taken down in the most pitiful mutiny ever; and The Sovereigns – who, as we’ve already discovered, are pointless.

What acting? There really isn’t an awful lot for most of the characters to actually do, apart from gurn a bit and say the odd funny line. The Mantis character shows the most emotion throughout the movie (unsurprising given that she’s an empath) while Nebula is probably the most believable – harbouring a deep hatred for her sister for reasons that are explained throughout the film, but reconciling at the end (although even that seemed a little rushed given that she’d spent at least 15 years trying to kill her)

Drax laughs a lot and says deadpan lines. Gamora looks stony faced for most of it, Peter more or less looks like he’s waiting for someone to laugh at a punchline all the time, and Rocket and Groot are entirely CGI so aren’t “acting” in the traditional sense. Hell, even Ego (played by the normally dependable Kurt Russell) kind of looks like he’s phoning it in.

This is actually pretty good as far as Marvel films go. A criticism often levied at the MCU movies is that the directors play it very safe visually and thematically, and I can’t say this is any different. However, a plus point for this movie is that, for the most part at least, you can always work out what’s going on even in the busiest of scenes, and although they’re “safe” shots, they are still fantastic looking – but this is more down to the VFX teams than the director, I’d wager.

This review really has rambled on far more than I originally intended it to, so here’s a TL;DR – it’s enjoyable enough I suppose, but I’d be surprised if you remember anything about it 6 months from now. I’m probably being unduly harsh, no-one really expects anything meaningful or whatever from these movies, and as a summer blockbuster I suppose it does the job. Unfortunately, I guess I’m suffering from “superhero fatigue” and I’m just finding it harder and harder to not be bored stiff during these glorified VFX showreels.