“Of becoming the finest retailer of washing sponges the US has ever seen.” – Martin Loofah King

Sorry, terrible joke, but it was the first thing that came to mind.

I’m blogging pretty much as soon as I’ve woken up, as I don’t often remember my dreams and when I do it’s usually all gone out of my head within an hour, so I thought I’d better get this down.

I had a dream last night that I was in a world where Doctor Who actually existed, and more so, I was a star player in one of his adventures. Well, sort of. The dream ended before things got really exciting, so I’m afraid this post will have something of an anti-climax.

I’m not 100% sure why I dreamt about The Doctor – the only thing I can think of is that I was reading a thread about it on BeEx shortly before I went to sleep. On reflection, that actually seems to be a fairly safe bet. Mystery solved!

That’s just my little made-up title for the adventure.

I was dreaming in black and white – which in itself is a little weird – so I must have been taking part in a William Hartnell or Patrick Troughton serial.

I was a supermarket till operator, who just happened to be walking back home from work past a laboratory when I noticed that all of the lights inside were still on despite it being very late at night, and also the door locks had been forced open. 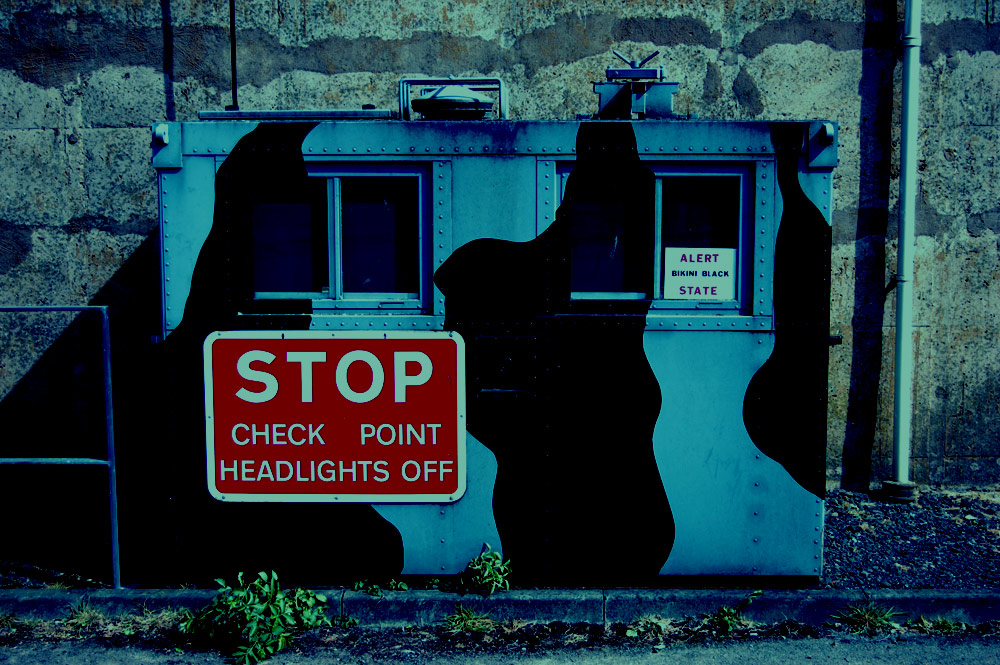 Against my better judgment, I went inside and investigated the disturbance, and found the aftermath of what looked like a pitched battle between the scientists that had worked there and some invading force. There were many dead bodies lying around, a couple of piles of ash, and one scientist who was still alive – barely. I rushed over to assist and he pointed towards an adjacent room and, with his dying breath, said something about safeguarding the “singularity device” and pushed a piece of paper into my hand.

I walked over to the adjacent room and peered inside – lots of equipment and a wall safe. The room had been ransacked but the safe remained locked.

I looked at the piece of paper – a code! I carefully made my way over to the safe, stepping over the detritus and battle-scarred furniture, and punched in the number from the paper. The safe bleeped and opened up, revealing a small, unassuming black box. The box had an antenna folded against it, a power switch, a red button marked “FIRE” and a protrusion at the top that kind of looked like a very short gun barrel.

Knowing a bit about science, and having a (very limited) idea of what a singularity was, I decided not to push the button but to instead keep it safe on my person and head home.

I was awoken by a very odd sound coming from my downstairs living room. A sort of “throm-throm-throm”, as if someone was running a bow across a violin in completely random directions.

I went down to try and find the source of the noise and was quite surprised to discover a blue police box sitting in the middle of the living room, with no obvious clues as to how it had got in. 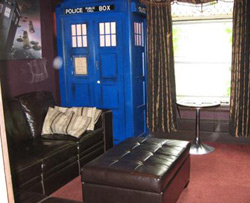 Before I could think about it any further, the door opened and an elderly looking man in a blue jacket stepped out.

I gave him my name, asked him how he’d managed to get into my house with his box, and more to the point, why he was in my house.

The Doctor explained his blue box – the TARDIS – to me, and how it could dematerialise and rematerialise without moving, how it was bigger on the inside and how it could travel through space and time. I didn’t really know how much to believe, but on the other hand, there was most definitely a blue box in my lounge that could not have got in in any other way short of wrecking half the walls to make a big enough hole.

He then went on to explain that he’d been following a unique energy signature, and asked me if I’d come across anything unusual in the last 24 hours. I hesitated, but explained the events of the previous night.

“A Singularity Device?”, he questioned, suddenly looking rather concerned. “May I see it?”

I handed it to him. He pulled out a weird looking probe thing from his coat and waved it over the black box. “Hmm, yes. And you say that somebody was after this? Did you see who?”

I told him that I hadn’t seen the attackers, but that I could take him to the laboratory and he could investigate himself. He agreed that this would be a good plan, so off we went. I had suggested we use his magic box, but he declined, stating “depending on who was after this thing, I may not want them to know I’m around.”

The return to the laboratory 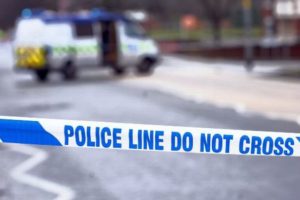 We arrived back at the laboratory to find the entire scene had been cordoned off by the police. Police tape was everywhere, and officers were stationed at every entrance and exit, guarding the building.

The Doctor told me not to worry, and to follow him whatever happened. We walked up to the entrance, and the officer stopped us, asking to see some ID. The Doctor pulled out a wallet, opened it up and showed a piece of blank paper to the Sergeant.

“Ah, sorry Sir. I didn’t recognise you. Go on in.” he said, and lifted the police tape for us both to enter.

The Doctor immediately set about looking into every nook and cranny. The bodies had all been removed, but he was particularly interested in the piles of ash that were laying around. He got out his probe thing, which he’d since explained was something called a “sonic screwdriver” and waved it over the pile of ash in front of him.

“Just as I suspected,” he said, “this is the work of Daleks.”

He took me off to a quiet corner of the room and explained who the Daleks were, where they had come from and how they had come to be. Purely genocidal xenophobic creatures of hatred, dedicated to ridding the universe of anything that wasn’t a Dalek.

He surmised that the Singularity Device was an experimental weapon, capable of creating singularities – or black holes – wherever it was pointed, and that the Daleks were almost certainly interested in it as a means of destroying the Earth and all of the non-Daleks contained upon it.

Before we could decide what to do next, there were loud screams and a horrible shrill sound, not too unlike the typical “death ray” laser from science fiction films. Unfortunately, that’s exactly what it was, and I got my first glimpse at one of these so-called Daleks as it rounded the corner in front of us.

It looked a bit like a salt and pepper shaker, was about five feet tall, and moved silently across the ground as if it was hovering ever so slightly above it. A weird looking stalk protruded from it’s “head”, which I assumed was some sort of eye, as the head span around to survey the area. Underneath, in its mid-section, were two metal “arms” – one that looked bizarrely like a sink plunger, the other like a kitchen hand whisk.

It caught sight of us, but before it could do anything with its new fleshy targets, the Doctor grabbed me by the hand and ran, pulling me with him.

We made it outside the laboratory to find that all of the police officers were now dead, clearly victims of these murderous travel machines.

The Doctor explained to me that the Daleks would most likely stop at nothing to get their hands – or plungers – on the device. The energy signature that he’d traced back to my house would likely be being traced by the Daleks as we spoke – they had probably returned to the laboratory because I’d removed the device from its safe and exposed the signature to their scanners. My house was probably crawling with Daleks.

Clearly the only thing we could do was try and hide the Singularity device again.

I had an idea. The supermarket I worked at had a cold room, used for storing all of the frozen goods. It was large, was sealed shut by a big thick insulated door, and was kept at a temperature of -18°C. We could hide the device in there.

The Doctor had another idea – he wanted to bury it far, far underground. He asked if there were any rock quarries nearby, but I told him that there weren’t, and that it probably would have ended in tears anyway – they’re very dangerous places!

So, we made our way over to my workplace. I climbed into the cold room suit and walked in, closing the heavy door behind me.

In the middle of the room, on the floor, was a little “air conditioning” system of sorts, that helped to keep the temperature low. I opened up the unit and placed the Singularity device inside. I reasoned that this would keep it safe from prying eyes.

Suddenly, I heard that telltale “death ray” sound again, and more screams. I heard the Doctor shout to me to stay there, and that he would come back for me.

I figured that my body temperature would also be quite well hidden in this room, so I wasn’t particularly worried.

I stayed in the cold room for what felt like an hour, waiting until I could hear nothing except the quiet monotone hum of the cold room’s air conditioners.

I opened the door and stepped outside.

And that’s where the dream ended…

I vaguely remember dreaming about the Doctor and I discussing other options – posting the device off to a random address in another country so they wouldn’t know where it had gone, destroying the device (I think the reason we didn’t do that was in case the act of doing so created a singularity on Earth) and even just taking the batteries out.

All I could think about when I woke up though was simply that, if the Doctor and I had gone back to the laboratory in his TARDIS, we could have escaped in that, with the device, and it could have been kept safe in there for the rest of time.

But then, technically 99% of the Doctor’s adventures would be solved with judicious use of the TARDIS. But he never does. I guess because that wouldn’t make for a very exciting adventure…