I’ve been told that I change cars more often than some people change their pants, so I thought I’d drop a post on here about my car history over the last 9 years.

I learned to drive in 2002, but failed my first driving test (it was an intensive driving course, all done within a week, and I didn’t have enough “on-road” experience to handle all situations, which led to some stupid errors) and couldn’t afford to continue with it until 2004, although I kept up private practice with my partner at the time supervising in the snot green 1.0L Nissan Micra that she had.

Although I passed in August 2004, it wasn’t until November that I bought my first car. If you want to get technical though, my first car actually arrived 5 years earlier. It was a 1.1L Ford Fiesta Popular Plus bought for me for £50 by my Dad: 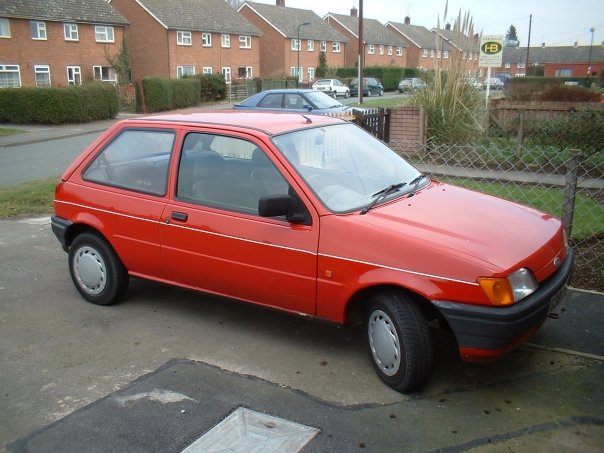 I never actually drove it, save for reversing it off the drive and back on to the drive a few times. Just as well, as from what I can gather it was something of a death trap, and my Dad never got around to fixing it up. Fortunately it had long gone by the time I passed my test.

Anyway, in November 2004, I bought myself a 1.4L Seat Ibiza SE – I seem to remember it cost £2,995 and I took out a finance deal with the dealer to pay for it, which probably meant it cost me a lot more than that. You can just see my partner’s Micra in the background of this shot. 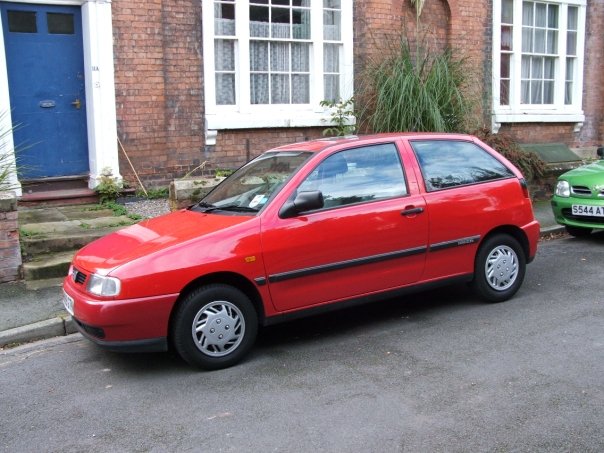 This was a great little car, nothing ever went wrong on it although back then I had little concept of mechanical sympathy and I used to rag it from cold all the time. It started to sound bloody awful. In the end, when I bought my next car, this was taken off my hands by my parents’ next door neighbour, who brought it back to good health for his wife and son to use. 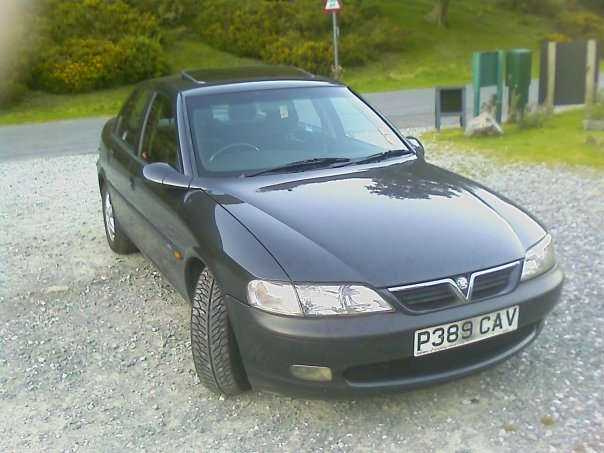 I bought this because I got a new job that had a longer commute and I wanted something that was a bit more comfortable. It wasn’t the most luxurious of cars, but it was the top-spec Vectra at the time so had a fair few toys. However, unbeknown to me, it also had an oil pump that was on it’s way out and it failed on the way home from work in April 2008. Still, for £455 it was fine.

I replaced it with the seventh-generation Toyota Celica, the 1.8L 140bhp version. 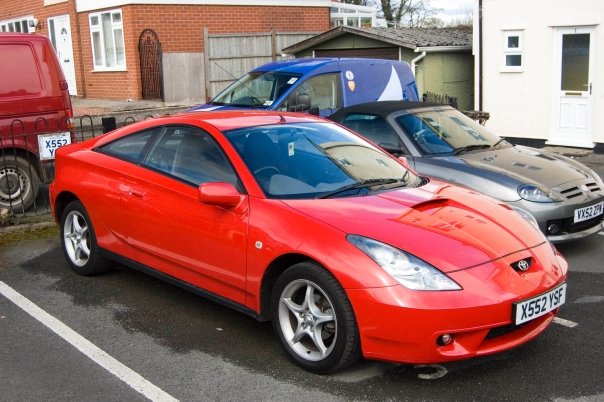 I’d always liked Toyota Celicas since seeing one of the fifth-gen GT-Fours in the WRC in the early 90s, and then playing Celica GT Rally on my Amiga. This was a nice car too, didn’t really feel slow (although objectively it was) and probably began my apparent obsession with changing cars all the time. I sold this one in July 2008, after it became apparent that the car was going through oil like it was Cherry Coke. The infamous “oval bore” problem with the 140bhp versions, and a lesson in “doing your research properly before buying.”

This time, the replacement was the Toyota Celica T-Sport, a facelifted version of the 190bhp seventh-gen Celica. 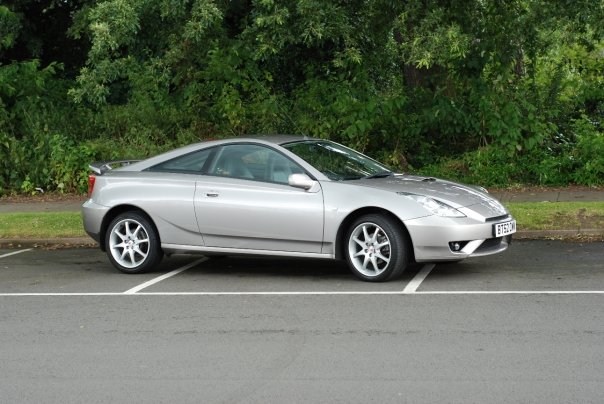 Much faster than the previous one, and better equipped, this still ranks as one of my favourites from my car history. Ridiculously practical, surprisingly economical, reasonably good looking and with enough power to deal with most situations easily. The only reason I got rid of it was simply because I wanted more power, and in January 2009 I swapped it for a Toyota Celica GT-Four (and some cash).

That’s how it looked when I bought it. Now, I still have this car – the longest I’ve owned a car. It doesn’t look like that any more though. When I bought it, it was on Ultralite wheels, had the facelift spoiler and while it was good looking, I wanted more. It now looks like this: 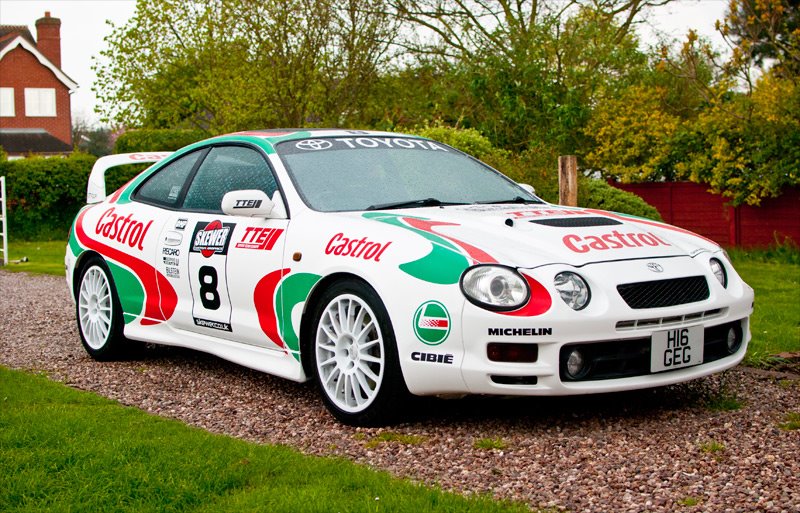 With a retrimmed interior too. There’s plenty of posts on here with more details on this car, so I won’t bore you with them again.

In May 2010, I decided to branch out a little bit. I wasn’t bored of the Celica, but was now in a position where I could afford to run another car, so I bought an import Mazda Eunos Roadster 1.6 for £1,200 off eBay. 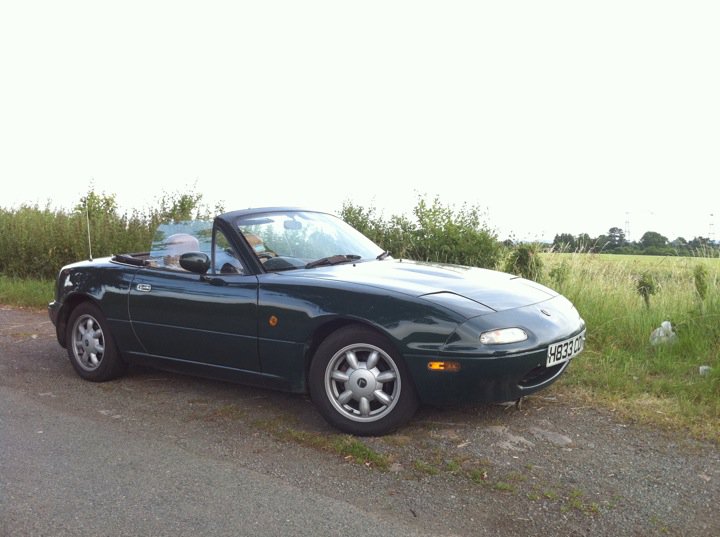 I had lots of fun in this car, it was my first experience of open-top motoring and I caught a bit of a bug as a result. It was the V-Special edition, so had tan leather seats with headrest speakers, a Nardi steering wheel and gearknob etc. and was excellent to drive. I kept this for a year before I got bored of it, and in May 2011 replaced it with a BMW 320ci convertible. 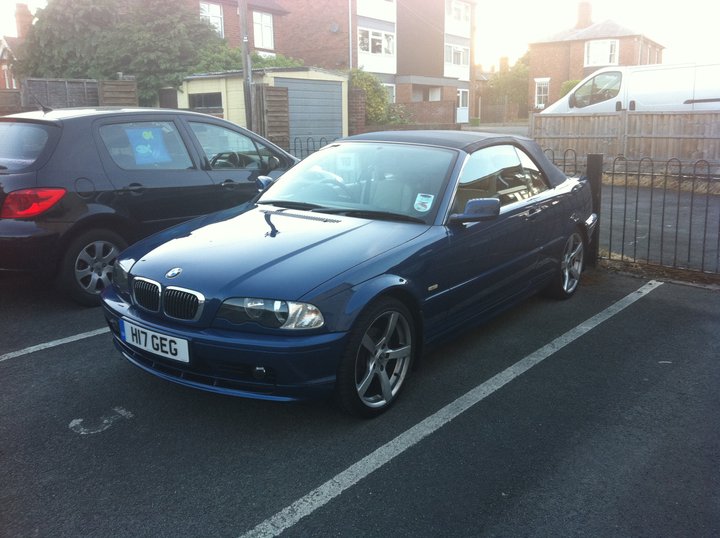 This one was a mistake, really. It was a decent enough car, nice to drive and was good with the top down, but it wasn’t massively fast and it was very unreliable while I had it. The roof went wrong, the suspension on two corners failed and I seem to remember the engine had an oil leak. And the wheels were gopping. Sold in October 2011.

The next car to come to the fold was a Toyota Corolla T-Sport, that used the same engine as the Celica I had previously. 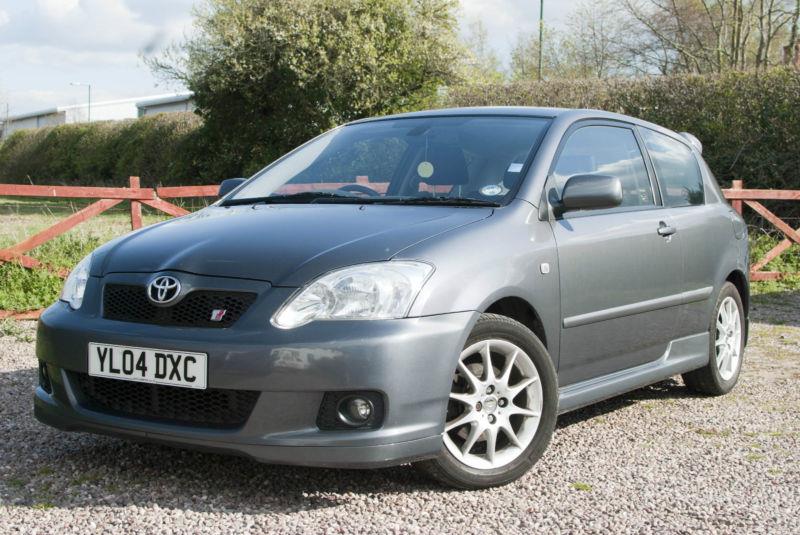 You’ll remember I said the Celica was still one of my favourites? The Corolla was terrible. More practical than the Celica, natch, but the engine just didn’t work in this car. The “lift” cam-change wasn’t as vicious, the handling was willowy. Gah. I still kept it for 6 months though, keeping it until April 2012.

During the Corolla ownership, I started to get a bit mental with my car purchasing, endlessly adding to the collection on the driveway. First up, in February 2012 was a Rev5 Toyota MR2 Turbo in Sonic Shadow colouring. 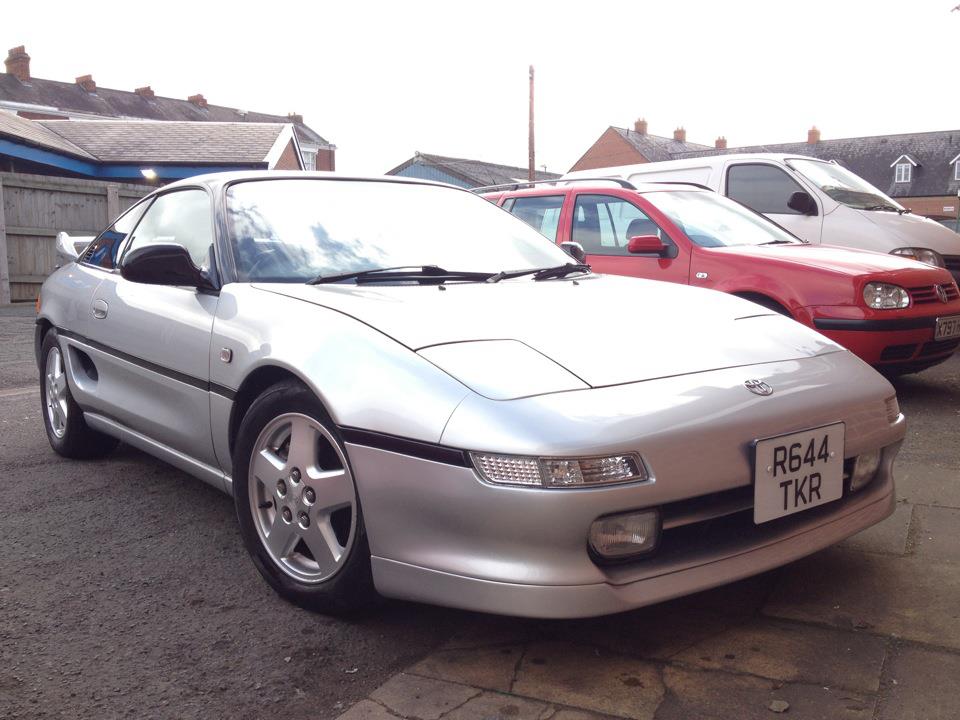 This was another fantastic car, that I regret selling. Same engine as my GT-Four, but in a lighter package and with RWD. It flew, and the driving position was awesome and added to the feel of being connected to the car. Not as practical as the other cars, but even so it had a surprisingly capacious boot! 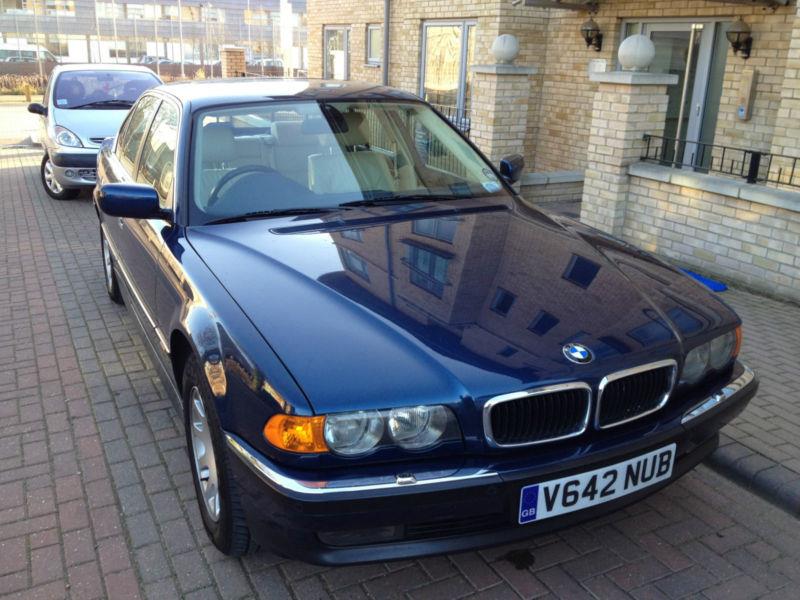 A bargain barge and no mistake, the only thing wrong with this car was that one of the power steering servos had failed, so steering was heavier at low speeds. Not insurmountable though, so it wasn’t an issue. Ridiculously comfortable, lots of toys, but ultimately a bit big. 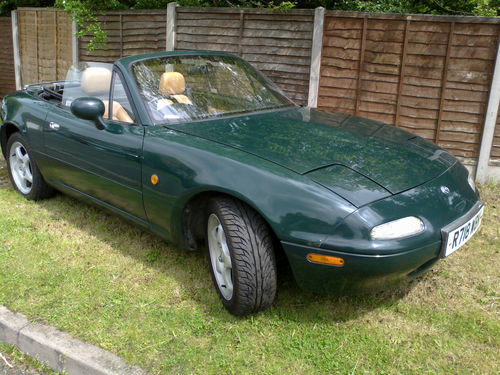 This was a bargain, I seem to remember it was only £700. It wasn’t without it’s faults though, and I didn’t really drive it enough to warrant keeping it. Not when you considered that my driveway currently looked like this: 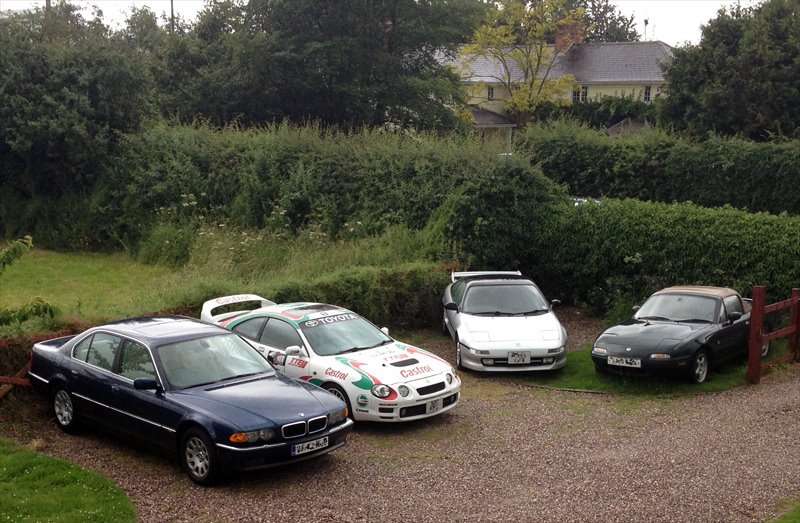 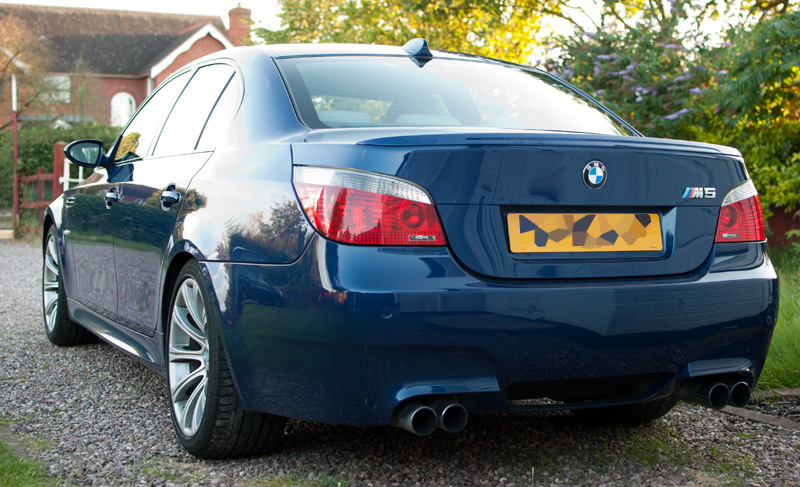 Bought as an approved used car from Stratstone Harrogate, this was (and is) a truly awesome piece of machinery. A fantastic engine, a luxurious interior and more toys than you could shake a stick at. The V10 howl was a bit understated, but the power certainly wasn’t. I’d probably still have this car if the clutch and flywheel hadn’t failed on it. Four months into ownership I was hit with a £2,000 bill to replace both. “Wear and tear” so not covered under the warranty. I paid out to have them replaced, enjoyed it for a while longer and then part exchanged it for something a bit more sensible in December 2012.

But not before I took ownership of a Honda Stepwagon from my father in September 2012. 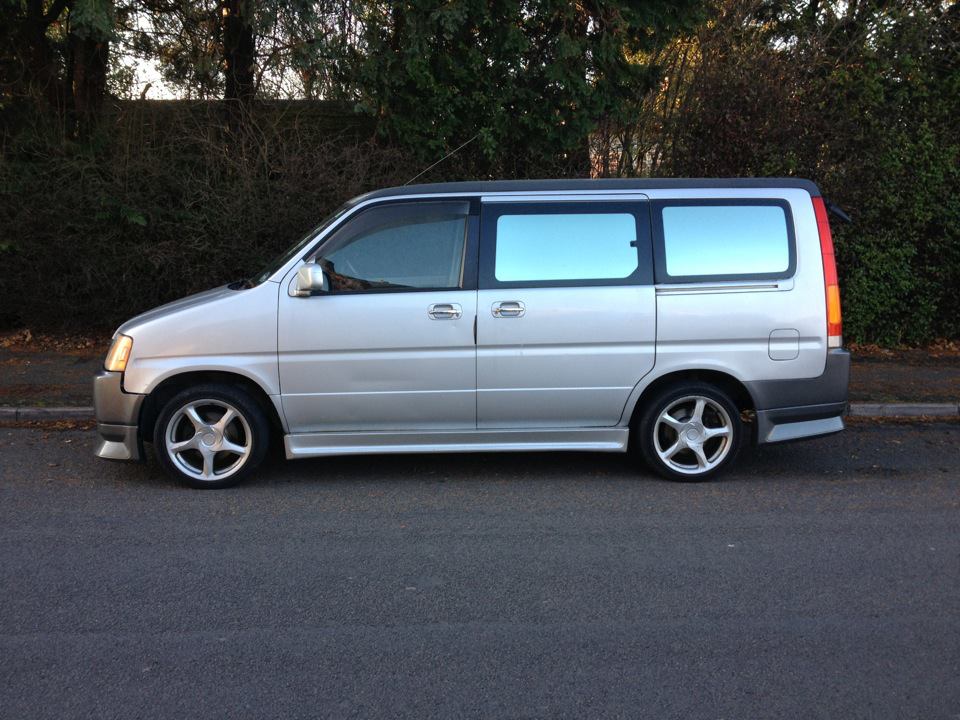 He’d bought this years previously to act as a transporter for my disabled Mum (it had space for a wheelchair in the back) but she deemed it unsuitable as she didn’t like going up and down the ramps to get into it. My Dad couldn’t bear to get rid of the car, so it sat unloved for a year or two. In September, a group of likely lads knocked on their door to ask if it was for sale, so I decided to shift it in case they decided to lift it. the idea was to turn it into a proper campervan, but the M5 was eating up my conversion funds – this eventually sold in March to a guy up in Scotland who made the trip down to pick it up.

Anyway, back to my “sensible part exchange” from the M5. A Mini Cooper S convertible. 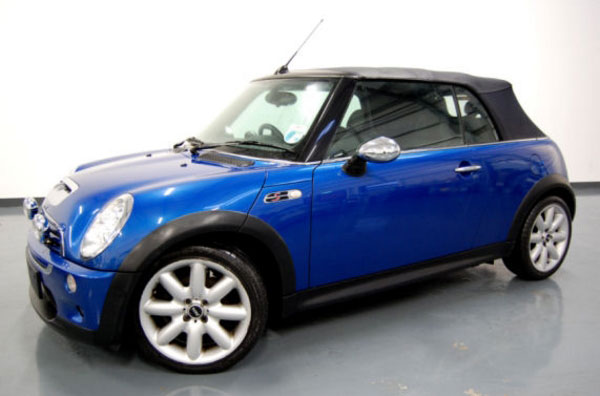 Yeah, it looks a bit of a girls car, but I don’t care about that sort of thing. It’s ace to drive, immense fun, with a decent bit of power to it. With the roof off, it’s even nicer – the supercharger whine is great and the pops and bangs from the exhaust are nice to listen to as well. Downsides with it are pretty bad though – it’s boot is tiny, rear visibility is non-existent with the roof up, and the rear seats may as well not be there. I’m gearing up to sell this, along with the only other car that remains in my current fleet, that I bought in February 2013. 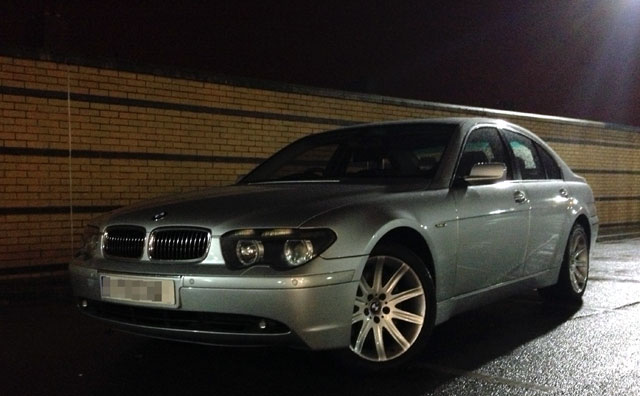 (only picture I have so far)

This has been LPG-converted so is surprisingly economical, and I deliberately sought out the most well-specced one I could find. It has almost all of the options on it, as far as I can tell. It drives beautifully, as one would expect from a 7-er.

I started getting stick off the missus (again) for having too many cars, so I sacked off the Mini and the 7. That left me tooling around in the Celica for a while, and then I was torn between jumping into either an E39 M5 or an E46 M3.

However, that plan didn’t come to fruition because in June 2013, I did something arguably far more stupid and ruinous. I bought this: 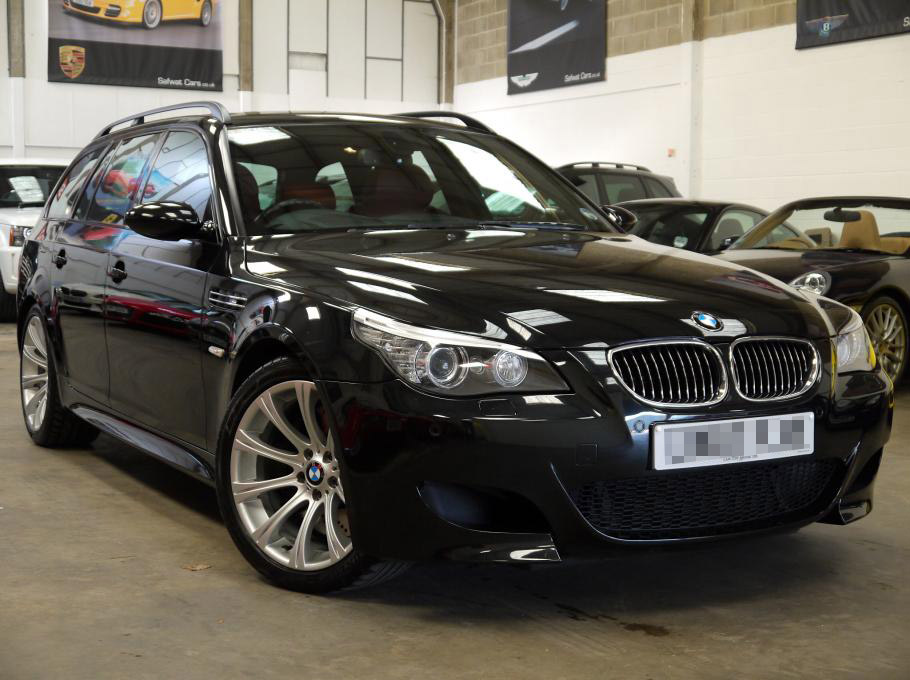 The draw of the S85 V10 engine was too much to resist, and I got it for a good price, so why not, eh? They only made 222 of these M5 Tourings in right-hand drive, so it’s a rare breed – there almost certainly aren’t 222 left! Black with a red leather interior, this is definitely my favourite of the BMWs that I’ve owned. As with the saloon version I had, the only real sticking point is the fuel economy (12mpg on a good day) but you don’t buy a 507bhp estate and worry about fuel consumption.

I’ve made a few changes to this car since I bought it – the main one being the replacement of the original exhaust system with an Eisenmann Race exhaust. This gives a glorious sound when pressing on, it really lets the V10 howl. It’s more than a little bit loud on cold-start though, so I expect my neighbours aren’t massively keen on it. I’ve also bought a set of the official BMW 18″ winter wheels and tyres for the snowy weather – although typically we haven’t had any yet – and finally a set of black kidney grilles for the front-end just to dechrome it a bit further.