The only difference between tonight’s workout and Monday’s is that tonight I only burned 201.3 calories, as opposed to 227.7.

Other than that, I can report that tonight was easier. How much of this is because I’m already getting used to running, and how much of it is because I had proper running equipment on tonight, I don’t know.

I can also state quite clearly that running is both easier and goes by quicker when you’re running to music that "sets the tempo" – tonight I was listening to Daft Punk’s soundtrack to Tron Legacy – the R3C0NF1GUR3D remixes. 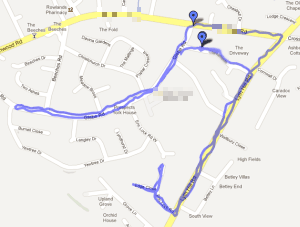 For as long as I can remember, I always wanted to be fitter. I’ve always been horrifically unfit, mainly because I spend most of my working life (and most of my spare time) either sat in front of a computer, sat in front of a TV with a computer on top of my lap (a laptop computer, if you will) or sat in the driving seat of some sort of motorised carriage (which has a computer in it, just to keep the theme going.)

Oh sure, every now and again I’ve made the effort to try and get myself fitter. I bought some weights once. Yes, indeed. However, the number of times I bought weights eclipsed the number of times I used those weights by… err… one. I tried cycling, but soon got tired of it when I realised that it made my arse hurt terribly and was generally pretty dangerous on the roads nearby.

I’ve even tried running before, but soon gave that up when I became disheartened at how quickly I ran out of puff.

So, it’s with some trepidation that I’ve decided to start running again – properly this time.